SU Competes against other Colleges in RecycleMania

Syracuse University has kicked off its participation in RecycleMania, an eight-week national competition against other colleges throughout North America to see who can reduce, reuse and recycle the most on-campus waste. 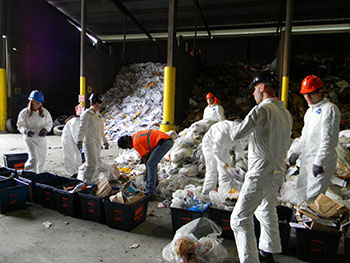 While doing a trash audit, students found recyclables in campus waste and sorted them into appropriate recycling bins.

Schools compete in 11 categories to recycle the most on a per capita basis, to decrease the most amount of waste and recycle the largest percentage of their overall waste stream. A winner will be declared after the competition ends on March 30.

After receiving the data from the pre-competition in January, Melissa Cadwell, marketing manager in the sustainability division, encourages all students, faculty and staff to be aware of SU’s participation in RecycleMania and make every effort to reduce waste on campus.

Onondaga County has a recycling rate of around 50 percent and the rate on campus the first week of the pre-competition was 39.7 percent, which Cadwell says is a great improvement from last year at 35.2 percent. Everyone on campus needs to be sure that if an item is recyclable it is placed in a recycling bin, not in a trash bin, says Cadwell.

“If the campus can continue to increase their recycling we should have an even better showing among our peer institutions,” says Cadwell.

In the past, Syracuse University has participated in the benchmarks division—meaning that SU competed to simply see how campus would place.

“Overall, for not advertising during the competition last year, SU had a great showing in the benchmarking competition. If we had competed, SU would have ranked 22 with 565,920 total pounds of recyclables in the Gorilla Prize category, 39 for food organics and 88 out of 297 schools in the Grand Champs category,” says Cadwell.

Syracuse has entered as a formal participant in this year’s tournament. The sustainability division is advertising for the tournament in the dining centers and on social media. Updated rankings are published each Friday throughout the competition so schools can track their progress and improve their standings against rival colleges. This year, New York State has more schools competing than any other state.

In 2013, 91 million pounds of recyclables and organic materials were recovered through the RecycleMania Tournament. Cadwell says what’s most important to remember is that while the tournament is only eight weeks, recycling and reducing waste on campus is critical every day of the year.