Donald I. Siegel, chair of the Department of Earth Sciences in The College of Arts and Sciences, has been appointed a 2013 American Geophysical Union (AGU) Fellow, a designation awarded to less than 0.1 percent of all AGU members in any given year. Also the holder of Meredith and Heroy professorships in the department, he is one of only 62 individuals to have been elected to the 2013 class of Fellows. SU alumnus C. Page Chamberlain ’79, now a professor of environmental Earth system at Stanford University, was also named an AGU fellow. 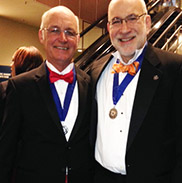 Siegel, who joined SU’s faculty in 1982, was awarded the AGU fellowship for his seminal contributions to understanding the hydrology and biogeochemistry of peatlands and deep aquifer systems.

According to the AGU: “To be elected a union fellow is a special tribute for those who have made exceptional scientific contributions. Nominated fellows must have attained acknowledged eminence in the Earth and space sciences. Primary criteria for evaluation in scientific eminence are: (1) major breakthrough, (2) major discovery, (3) paradigm shift and/or (4) sustained impact. ”

“This is a tremendous honor, and I am thankful to the AGU for awarding me such an esteemed award,” Siegel says.  “Seldom do people get to say they love what they do, but fortunately for me, I am one of the few. I work with a fantastic group of scientists, faculty and grad students, all of whom are dedicated to their work, conducting impactful research and educating the students we teach.”

Siegel was appointed department chair in 2013 and previously was appointed a fellow of the American Association for the Advancement of Science and a fellow of the Geological Society of America. That organization further awarded Siegel its Distinguished Service Award, the Meinzer Award for research contributions and its Birdsall-Dreiss Lectureship. Siegel is a lifetime associate member of the National Research Council (an arm of the National Academy of Sciences) and recently finished chairing the council’s Water Science and Technology Board. He has authored more than 150 scientific articles, and widely provides expert services to governmental agencies, industry, non-profits and legal firms. He holds a Ph.D. from the University of Minnesota and a master’s degree from Penn State University.

The AGU is a not-for-profit, professional, scientific organization representing more than 62,000 members in 144 countries.