The results of a unique and highly successful fundraising initiative for the School of Information Studies “Fuel the Future” campaign are in.

The effort raised a total of 170 gifts–and nearly $30,000–through the generous direct contributions of students, staff, faculty, alumni and friends of the school.

The online crowdsourced campaign was conducted for 60 days beginning Oct. 1.

The challenge funds–$5,000–were provided by alumnus Sam Clarvit ’10 to provide a little competition and excitement for the five student programs participating in the fundraising campaign. His first-, second- and third-place awards boosted the total amount raised by direct contributions made to support programs that enhance student educational experiences and professional development.

Here are the results:

Reaching first place, with the most number of contributions made, is the Student Immersion program.

That effort garnered a total of 41 separate gifts, amounting to $5,214. As the top gift earner, that program also will benefit from $3,000 in additional funds from Clarvit’s challenge contribution, for a total of $8,214. 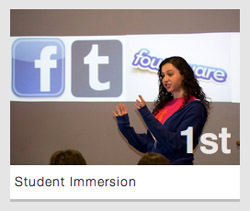 “I had a chance to meet with students on the EntreTechNYC student immersion trip this past May, and with Spring Break in Silicon Valley students last year, and I was very impressed by the experiences that they had,” says Clarvit. “I’m glad that the proceeds from the Fuel challenge will provide support for student trips like these.”

Second place in the number of gifts received is the It Girls Overnight Retreat program.

The program also receives the second-place award of an added $1,500 from Clarvit’s challenge funding (for $6,821 total raised).

Coming in third place in the number of individual gifts received is the New Librarianship program. With 36 gifts totaling $3,816, the program also receives Clarvit’s third-place challenge gift of an added $500, bringing in $4,316 to support students benefiting from that program.

Fourth in the total number of gifts made is the Student Sandbox program. The 28 gifts contributed add $5,457.44 in funding assistance. Fifth place in the effort is the Students of Promise program. That category garnered 25 gifts, and $5,036 in total funding from those contributions.

All campaign updates can be viewed here.

“We are thrilled with the results from the iFuel Challenge. Our alumni, parents, friends, staff, faculty and students responded with extraordinary generosity and enthusiasm,” says Scott Barrett, assistant dean for advancement for the school. He says that the unique nature of the campaign was reflected in the diverse range of contributors and in results that were significantly different from past fundraising efforts. “iFuel has allowed the iSchool to tell multiple, compelling stories to wide and diverse audiences,” he notes, also citing these statistics:

Modeled after successful online crowdfunding platforms, such as Kickstarter and Indiegogo, the online campaign and website were created and built by iSchool students and iSchool staff professionals.

“I’m very appreciative of the iSchool alumni and friends who have made a gift to the Fuel challenge over the past two months,” says Clarvit. “Their contributions will directly affect the student experience at the school.”

“We are indebted to the students/recent iSchool grads who designed and built the site, Eric Cleckner and Andrew Bauer, plus Jared Mandel, who produced videos,” Barrett says. “They were great to work with and extraordinarily talented. Dean [Elizabeth] Liddy and Sam Clarvit  were so supportive of this work, and the internal iSchool team, led by Jessica Murray, was simply outstanding. It was great to work on this first attempt at crowdfunding at the iSchool and the University. In light of the results, we are already discussing appropriate follow-up opportunities for 2014.”

“We live in an increasingly digital environment and our students need to have a specific set of skills to function in society and to succeed in any career,” says Jian Qin, professor and program director of the master of library…

When it comes to choosing a partner, humans tend to be attracted by characteristics like personality and common interests. In contrast, insects tend to be a bit shallow, as they choose a mate based on appearance, and in some cases,…

May 6 is World Password Day, an annual reminder to promote better password habits and digital security. With more of our lives online than ever before, what should people know about passwords to better protect their identity and private information?…