Climate Change Garden Mixes the Future with the Present 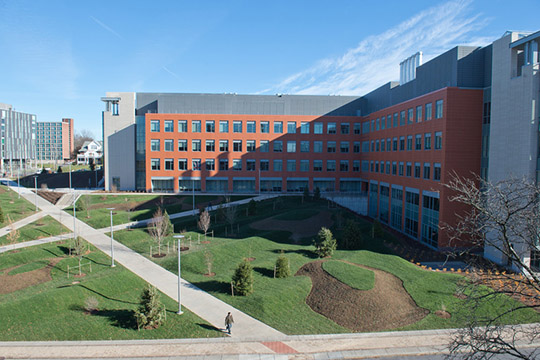 The Syracuse Climate Change Garden in the Life Sciences Complex’s quadrangle will give students firsthand experience with trees and shrubs that are native to warmer and drier places.

Scientists expect Central New York’s climate to more closely resemble that of South Carolina by the end of this century, and ecologists have long warned that our local forests of sugar maple and basswood may gradually change to the drier oak-hickory forests of the U.S. South and Midwest.

At Syracuse University, an innovative plan for landscaping the new Life Sciences Complex quadrangle that is currently under construction on SU’s Main Campus will give students firsthand experience with trees and shrubs that are native to warmer and drier places.

What is so unusual about the Climate Change Garden’s design is that it features species that are expected to decline here over the coming decades—including sugar maple and yellow birch—growing alongside close relatives that may increase in our region, such as black maple and sweet birch.

By growing several individuals of each species across the garden—34 species in all—and taking regular measurements on growth, leaf and root behavior, and overall tree health, students will be able to track the potential replacement of “northern” species with “southern” or “western” ones.

“As far as we know, this is the first garden designed for education that is geared specifically to track climate change effects on ecosystems,” says Jason Fridley, associate professor of biology in The College of Arts and Sciences. “To have this right outside our building, in such an attractive space, as a university resource it is simply unrivaled.”

The garden is the brainchild of SU biology professors, working closely with colleagues at SUNY-ESF. With construction of the Life Sciences quad delayed for several years after the new building opened, an opportunity emerged to replace some of the original design—which included the undulating topography meant to replicate central New York’s glacial heritage in miniature—with a more scientific one that involved more species from a larger range of tree and shrub types.

“The idea of converting the landscaping outside of the Life Sciences Building to an educational garden occurred to us while Jason and I walked across campus to grab some coffee,” says Doug Frank, a professor in the Department of Biology. He adds wryly, “We’re making a point to go for coffee together more frequently.”

Don Leopold, Distinguished Teaching Professor at SUNY-ESF, who teaches the oldest and largest dendrology (tree) course in the country, advised on the project.

“This is the most significant tree planting up on the Hill,” Leopold says. “Not only will it be a unique educational opportunity for students at Syracuse University, but it will surely be of great interest to many of our students at ESF. Some of the selected tree species occur nowhere else in Central New York, so I am very excited about this planting and its significant instructional value.”

The garden design features nine core species groups, including maples, oaks, pines, birches, firs, magnolias, hemlocks, viburnums and witch hazels. In most of these groups, there is at least one “northern” member, one “southern” member and one “western” member (either more common in the Midwest or Western United States). Oaks, for example, include red and white oaks familiar to Central New Yorkers, plus the Midwestern shingle oak and the Southern shumard oak.

“We expect some of the southern species to have a rough go of it if we have some extreme winters over the next few years,” says Fridley. “That’s part of the educational value—which species are truly limited by climate, and which aren’t?”

A final wrinkle in the design was to include a few species from each group native to Europe or East Asia, for students to examine potential issues of invasive species. Linden viburnum, for example, is native to China, Japan and Korea, yet is widely grown as an ornamental in the United States and in some cases has been spread by birds into adjacent forests. Such non-native species may be as much a part of Central New York’s future landscape as native U.S. species.

“We are unaware of any other on-campus facility literally feet away from the classroom that allows students to study, firsthand, the consequences of climate change,” says Frank. “The beauty of the garden is that its value will only increase over time for the benefit of many future generations of students.”