The School of Information Studies (iSchool) announced that San Francisco entrepreneur Philip Kaplan, a 1997 graduate of the school’s information management and technology program, will deliver the convocation speech at the Class of 2014 ceremony in May. His selection was made by, and announced at a gathering of, the members of the senior class during an event in Hinds Hall. 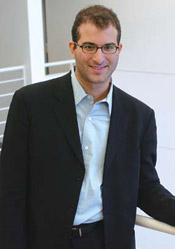 “We selected Philip because we thought his experiences in the startup world would be very interesting to hear about, especially given the growth we are starting to see of students getting more and more involved in startups, through the Tech Garden and other opportunities,” says Class Marshal Lauren Peters. “We believe he will give a strong message about life after the iSchool, and he will be able to show us that with a degree from here, you can have incredible success, no matter what your passions are.”

“Philip is at the forefront of the technology industry, and his experiences relate back to the iSchool and the experiences we have had as students at the University,” says Class Marshal Kevin Kettell.

Currently, Kaplan is working on two music-related ventures. Fandalism is a social network for musicians to share their work and interact with other artists, and his newest venture, DistroKid, is a service that allows musicians to easily publish their tracks to online marketplaces like the iTunes store, Spotify, Google Play and Amazon.

Kaplan is also the bestselling author of the 2002 book “F’d Companies: Spectacular Dot-com Flameouts” (Simon & Schuster), which chronicles some of the major disasters of the late 1990s and early 2000s tech boom. The book grew out of a website Kaplan created in 2000 that followed the bankruptcies and layoffs occurring across the tech sector.

“I am proud that Philip will be our convocation speaker,” says iSchool Dean Elizabeth D. Liddy. “Philip has demonstrated considerable success across many different fields with his entrepreneurship efforts, and his talk will be of interest to our graduates and their guests at the ceremony. In addition, he has been a continuous and generous mentor to our entrepreneurial students—both in meetings during the students’ Spring Break in Silicon Valley initiative, and later during follow-up mentorships of sudents.”

Additionally, from 2006–2012, Kaplan served as a contributory member of the iSchool’s board of advisors.