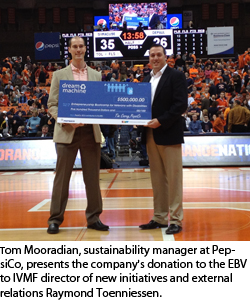 PepsiCo Inc., in association with its Dream Machine® Recycling Initiative, has presented a $500,000 donation to the Entrepreneurship Bootcamp for Veterans with Disabilities (EBV) founded at Syracuse University and operated by the Institute for Veterans and Military Families (IVMF), which offers self-employment career training, education and job creation for post-9/11 veterans with service-connected disabilities. Launched in 2007 at SU’s Whitman School of Management, the EBV is offered through a national consortium of eight world-class schools that includes Texas A&M, Purdue, UCLA, UConn, Louisiana State, Florida State and Cornell, with SU serving as national host.

The contribution from PepsiCo (initially announced on Veterans Day 2012) was presented to the EBV during halftime of the March 6 Syracuse men’s basketball game, bringing the total donation amount to the EBV from PepsiCo to $1.5 million over the past three years.

“PepsiCo is honored to provide continual support to the Entrepreneurship Bootcamp for Veterans with Disabilities through the Dream Machine Recycling Initiative and to help make public recycling a more convenient and rewarding process,” says Tim Carey, senior director of sustainability, PepsiCo. “Through this program, we have seen amazing results, from the over 5,500 bins and kiosks located across the country, to the more than 600 graduates of the EBV program. We look forward to helping keep our environment healthy for generations to come.”

“The EBV provides entrepreneurship education to post-9/11 veterans with disabilities at no cost. We are proud that over the past three years we have continually been able to achieve that goal with the support of PepsiCo and the Dream Machine Recycling Initiative,” says EBV founder Mike Haynie, IVMF executive director and founder and Barnes Professor of Entrepreneurship at Whitman. “It is also rewarding to know that we are part of PepsiCo’s ongoing sustainability efforts and that by simply recycling through a Dream Machine, the public can do their part to help support our nation’s veterans.”

The Dream Machine Recycling Initiative has diverted more than 200 million beverage containers from landfill to recycling since the program’s inception in 2010. The program has served as a catalyst for other companies to amplify their own recycling efforts and PepsiCo is proud to be a leader in the sustainability movement and a contributor to important veteran services.  All Dream Machine Recycling Initiative totals include collections from Dream Machine kiosk and bins, Recycle Rally participants and PepsiCo industrial locations.