Modifications of a nanoparticle can change chemical interactions with cell membranes 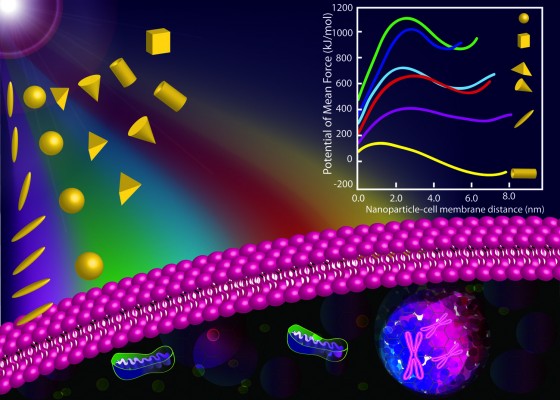 Researchers at Syracuse University’s Department of Biomedical and Chemical Engineering at L.C. Smith College of Engineering and Computer Science are studying the toxicity of commonly used nanoparticles, particles up to one million times smaller than a millimeter that could potentially penetrate and damage cell membranes.

In a recent article published along with cover art in the leading journal Langmuir entitled “Effects of nanoparticle charge and shape anisotropy on translocation through cell membranes,” researchers Shikha Nangia, assistant professor of biomedical and chemical engineering (BMCE), and Radhakrishna Sureshkumar, Department Chair of BMCE and professor of physics, showed how simple shape and charge modifications of a nanoparticle can cause tremendous changes in the chemical interactions between the nanoparticle and a cell membrane.

Nanomaterials, which are currently being used as drug carriers, also pose a legitimate concern, since no universal standards exist to educate and fully protect those who handle these materials. Nanoparticles are comparable to chemicals in their potential threat because they could easily penetrate the skin or be inhaled.

“Nanotechnology has immense potential that is starting to be being realized; a comprehensive understanding of toxicity of nanoparticles will help develop better safe handling procedures in nanomanufacturing and nano-biotechnology” says Sureshkumar and Nangia, In addition, the toxicity levels of various nanoparticles can be used to our advantage in targeting cancer cells and absorbing radiation during cancer therapy. Nanotoxicity is becoming a major concern as the use of nanoparticles in imaging, therapeutics, diagnostics, catalysis, sensing and energy harvesting continues to grow dramatically.

This research project has taken place over the past year utilizing a state of the art 448 core parallel computer nicknamed “Prophet” housed in Syracuse University’s Green Data Center. The research was funded by the National Science Foundation.

Langmuir is a notable, interdisciplinary journal of American Chemical Society publishing articles in: colloids, interfaces, biological interfaces, nano-materials, electrochemistry and devices and applications. It can be found at: pubs.acs.org/journal/langd5.