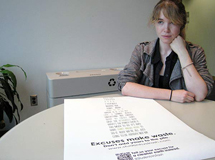 Abby Legge, a  S.I. Newhouse School of Public Communications and College of Arts and Sciences dual major in design and writing, was the New York State winner and one of three top “trash conquerors” chosen in the recent Students Vs. Trash poster design contest. Her poster, “Excuses make waste,” cleverly sets a long list of reasons why people don’t recycle in the shape of a bottle.

“I wanted to get at the heart of why people don’t recycle,” says Legge, describing the approach she took with her poster. “I’m not overly zealous about recycling, but now I’m definitely more conscious of it. I’ll find myself walking around with a plastic bottle until I find a recycling bin.”

Students Vs. Trash, an Environmental Finance Center program, set out to defeat trash with design and get people excited to reuse, recycle and stop littering. Contest entries were accepted during the spring 2012 semester. Voting for the winners was conducted entirely via the Students Vs. Trash Facebook page through last summer and into the fall semester.

“I first heard of the contest from my Intro to Graphic Design class professor,” says Legge. “We were assigned a class poster project, but also given the option to do the [Students Vs. Trash] contest instead. I chose the contest because I figured I didn’t have anything to lose.”

Legge’s winning poster came close to never being created at all. “This was actually my second idea,” she says. “I originally came up with an idea that I thought was pretty good. Then, one or two days before it was due, I came up with a different idea.”

Fortunately, this second-guessing paid off for Legge. It also got her an “A” on the poster for her class assignment. Unfortunately, the Students Vs. Trash recognition event for the contest’s winners, which was scheduled for November in New York City, had to be canceled due to Superstorm Sandy.

Want a printed copy of Legge’s winning poster to display to help bring out the inner “trash conqueror” in you or those around you? Contact SU’s Sustainability Division at sustain@syr.edu or 443-9820 with your request. Or, you can download and print all three Students Vs. Trash winning posters and others from the contest by visiting www.studentsvstrash.com/digital-posters.html.