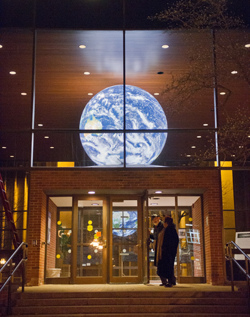 The Heroy Geology Laboratory lobby now features the latest landmark on campus–a 10-foot-diameter, inflatable, illuminated globe that is visible day and night to the thousands of students going to class and the crowds of spectators going to events in the Carrier Dome.

The globe, which was manufactured by Orbis World Globes, rests on a custom-built base atop the entryway vestibule in the Heroy lobby, and is tilted on a 23.5° axis (also made by Orbis), the same axial tilt as the Earth. It is made of a giant NASA mosaic photograph consisting of thousands of individual images taken from satellites that provide an incredibly accurate depiction of planet Earth. It was mounted by Mike Cheatham of the Department of Earth Sciences, and by SU Maintenance and Building Services’ West Zone.

Installed by the Department of Earth Sciences in SU’s College of Arts and Sciences, the globe symbolizes a field of study that touches every aspect of our living planet—from the study of the Earth’s deep past to environmental geology, water quality and global climate change.

“Installing the globe was something we wanted to do for a long time,” says Jeffrey Karson, Department Chair and Jessie Page Heroy Professor of Earth Sciences. “We wanted to make the Heroy Geology Laboratory lobby a campus landmark for science.”

The installation of the globe is part of a multi-year project to transform research and teaching spaces in the building. The building improvements include new custom, clean laboratories that facilitate leading-edge research in isotope and low-temperature geochemistry; a new computer-based teaching laboratory and a microscopy teaching laboratory to facilitate the department’s research-based approach to teaching and learning.

“The globe,” Karson says, “is a nice reminder of our planet and adds an aesthetic quality and educational focus to the lobby that makes the building more welcoming to students and visitors.”

Cassie Dagostino is a work-study student in the Office of News Services.