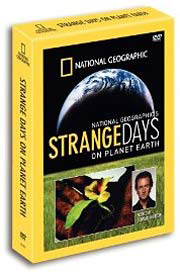 Can dust storms in Africa be linked to an asthma epidemic in the Caribbean? How can crumbling houses in New Orleans be related to voracious creatures from southern China? Come see how seemingly unrelated events happening on different continents can be connected in the fourth movie of the SUstainable CommuNitY Film Series.

The award-winning “Strange Days on Planet Earth” will be shown on Thursday, Nov. 1, at 6:15 p.m. in the Noble Room of Hendricks Chapel. A simple supper will be provided to start the event. Admission is free and open to students, faculty and staff.

After the film, Sarah Pralle, associate professor of political science in the Maxwell School, and William Snyder, professor of environmental science at SUNY Morrisville, will facilitate a conversation around the documentary’s sustainability implications.

“Strange Days on Planet Earth” follows scientists investigating unsettling mysteries around the world. Through these journeys, a new picture of the earth unfolds, showing that mankind’s influences on nature and the planet are all interconnected—even when they span distant locations across the globe. Narrated by Edward Norton, this film explores the impact of humans on the environment. Once all the pieces are put in place, it will become clear that these are certainly strange days on planet Earth.

The SUstainable CommuNitY Film Series started in September and is featuring a total of five documentaries this semester that address different sustainability challenges. The fifth and final film, “Food, Inc.,” will be screened on Nov. 15. The series is sponsored by the SU Sustainability Division and the Lutheran Campus Ministry/STEP Center at Hendricks Chapel. For more information, contact Rick Martin at 315-443-3953 or rjmart01@syr.edu.