The world’s fresh water supply is becoming scarce as we pollute and waste one of our most precious and limited resources. This scary and intriguing scene sets the stage for the second movie in the SUstainable CommuNitY Film Series. 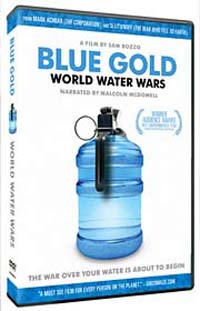 The award-winning documentary “Blue Gold: World Water Wars” will be shown on Thursday, Oct. 4, at 6:15 p.m. in the Noble Room of Hendricks Chapel. A simple supper will be provided to start the event. Admission is free and open to students, faculty and staff.

After the film, David Chandler, professor of practice in civil and environmental engineering in the L.C. Smith College of Engineering and Computer Science, and Joseph Heath, general counsel to the Onondaga Nation, will facilitate a conversation around the movie’s sustainability implications.

“Blue Gold” follows the privatization of water in developing countries and describes the increasing military control of this vital natural resource. The documentary lays out various examples of people around the world who are fighting for their right to access water. Based on the book by Maude Barlow and Tony Clarke, “Blue Gold” enlightens viewers about the rapidly approaching world water crisis and this life-sustaining resource’s entrance into the global marketplace and political arena. The film suggests that in the future wars will be fought over water, comparable to fighting over oil today.

The SUstainable CommuNitY Film Series is running a total of five films throughout this fall semester. Each feature is an award-winning documentary that addresses a different sustainability challenge. The series is sponsored by the SU Sustainability Division and the Lutheran Campus Ministry/STEP Center at Hendricks Chapel. For more information, contact Rick Martin at 315-443-3953 or rjmart01@syr.edu.