Think back to when you were a kid. Did your parents ever make you finish all of the food on your plate before you could be excused from the table? While many of us can probably recall such memories, you’d probably think this wasn’t a universal experience among residence hall diners. That’s because in every Syracuse University dining center, hundreds of pounds of uneaten and partially eaten food gets left on dining trays each day throughout the academic year. 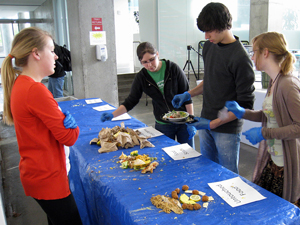 Two students are trying to change this by getting their fellow students to alter their dining habits. SU Sustainability Division interns Becca Osborne, senior environmental science and renewable energy major at the SUNY College of Environmental Science and Forestry, and Lindsey Adams, senior public health major in SU’s Falk College of Sport and Human Dynamics, recently gave students a firsthand look at the food they’re wasting.

After finishing their meals, students turn in their trays to volunteers stationed near the tray return. The volunteers remove all uneaten food and food waste, placing it on a tarp-covered table into three separate piles: untouched food, food scraps and non-edible waste (watermelon rinds, banana peels, etc.). When the food scrap piles grow too large, they’re removed and weighed.

“Some people were pretty grossed out to see all of the food piled on the table,” says Osborne. “Others became interested after seeing all the wasted food and said that what we were doing was a good thing. There were even a few students who quickly finished the leftovers on their plates while waiting to turn in their trays. I guess a little pressure can make an impact on people.”

In addition to the visual impact piles of food waste can have, the two seniors also hoped that their intervening efforts would get students to waste less food.

“We did two audits—one at the beginning and one at the end of the month—because we wanted to see if we could reduce the amount of food students were wasting,” says Adams. “In between the two audits, we put table-tent signs out in the dining center with information about how wasting food is wasting energy, and the nutritional aspects of taking too much food such as overeating and obesity.”

A few days before the second tray waste audit, Osborne and Adams also set up an informational table at the dining center to highlight the negative aspects of food waste.

Adams estimates that approximately 700 students dined during each audit. To reduce the likelihood of unintended effects on the results, both audits were conducted on Fridays that had similar dinner menu offerings.

To get students to waste less food, Osborne and Adams point to the Taste, Don’t Waste campaign that SU Food Services promotes in all of its dining centers. “Try to take a sampling of different foods to taste first, and if you like it you can always go back for more,” says Osborne.

Although SU’s dining centers do generate a large amount of tray waste, it’s important to note that it all gets composted, thanks to a two-year-old program in place with Onondaga County Resource Recovery Agency (OCRRA). So while it’s always best not to waste any food in the first place, at least the food scraps that SU send for composting get transformed into something that benefits the local community.

Both Osborne and Adams are drawing upon their Sustainability Division internships and the tray waste audits they’ve conducted as the basis for their senior projects. Osborne’s project focuses on how energy is wasted due to the portion of food that gets wasted, as well as the behavioral aspects of food waste. Adams’ project also focuses on the behavioral aspects, but in how they relate to public health issues.