The discovery of the mineral jarosite in rocks analyzed by the Mars Rover, Opportunity, on the Martian surface had special meaning for a team of Syracuse University scientists who study the mineral here on Earth. Jarosite can only form in the presence of water. Its presence on Mars means that water had to exist at some point in the past. The trick is in figuring out if jarosite can be used as a proxy for determining when, and under what conditions, water was present on the planet. 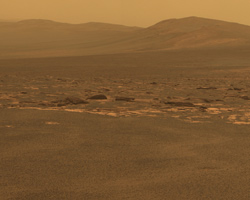 The SU scientists have done just that. In a recent study published in an October (v. 310) issue of Earth and Planetary Science Letters, Suzanne Baldwin, professor of Earth Sciences in SU’s College of Arts and Sciences; and Joseph Kula, research associate and corresponding author for the study, established the “diffusion parameters” for argon in jarosite. In simpler terms, they discovered a way to use the noble gas argon, which accumulates in jarosite over time, to determine the age of the mineral and the surface conditions under which it formed.

The new study is the first in a series of experiments designed to provide a roadmap of sorts for scientists who may someday study Martian samples brought back to Earth. “Our experiments indicate that over billion-year timescales and at surface temperatures of 20 degrees Celsius (68 degrees Fahrenheit) or colder, jarosite will preserve the amount of argon that has accumulated since the crystal formed,” Kula says, “which simply means that jarosite is a good marker for measuring the amount of time that has passed since water was present on Mars.”

Moreover, since the development of life requires water, knowing when and for how long water was present on the Martian surface has implications for the search for potential habitats harboring life, the scientists say. “Jarosite requires water for its formation, but dry conditions for its preservation,” Baldwin says. “We’d like to know when water formed on the surface of Mars and how long it was there. Studying jarosite may help answer some of these questions.”

Jarosite is a byproduct of the weathering of rocks exposed at the surface of a planet (such as Earth and Mars). The mineral forms when the right mixture of oxygen, iron, sulfur, potassium and water is present. Once formed, the crystals begin to accumulate argon, which is produced when certain potassium isotopes in the crystals decay. Potassium decay is a radioactive process that occurs at a known rate. By measuring the isotopes of argon trapped within the crystals, scientists can determine the age of the crystals.

However, because argon is a gas, it can potentially escape rapidly from the crystals under hot conditions or slowly over long durations at cold conditions. In order to determine the reliability of the “argon clock” in jarosite, the scientists had to determine the temperature limits to which the crystals could be subjected and still retain the argon. Using a combination of experiments and computer modeling, the team found that argon remains trapped inside the crystals for long periods of time over a range of planetary surface temperatures.

“Our results suggest that 4 billion-year-old jarosite will preserve its argon and, along with it, a record of the climate conditions that existed at the time it formed,” Baldwin says. The scientists are in the process of conducting further studies on jarosite that formed less than 50 million years ago in the Big Horn Basin in Wyoming, which they hope will reveal when the minerals formed and how fast environmental conditions changed from water-saturated to dry. The results can be used as a context for interpreting findings on other planets.

Baldwin and Kula are members of the NASA-funded New York Center for Astrobiology at Rensselaer Polytechnic Institute in Troy, N.Y. The center is one of 10 such centers nationally that are part of the NASA Astrobiology Institute, located at NASA’s Ames Research Center at Moffett Field, Calif. Their jarosite research is funded by NASA.