Expedition leaders include Robert Ballard, discoverer of the Titanic and JFK’s PT-109 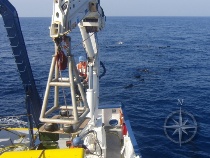 A Syracuse University scientist, an alumna and an undergraduate student are exploring the deep-sea floor off the coast of Portugal this week aboard the E/V Nautilus, a 64-meter research vessel operated by Ocean Exploration Trust in collaboration with the National Oceanic and Atmospheric Administration (NOAA), and the National Geographic Society.

Jeffrey Karson, the Jessie Page Heroy Professor and chair of the Department of Earth Sciences in SU’s College of Arts and Sciences, is the chief scientist on board the vessel from Oct. 8 to 19. Aleece Nanfito G’11 is working on the ship as a data logger and Darcy Joyce, a junior earth sciences major, will work on a project based on the discoveries that are made during the voyage.

Their voyage is part of the New Frontiers in Ocean Exploration 2011 expedition, led by Robert Ballard, explorer-in-residence for the National Geographic Society and president of the Institute for Exploration; and Katherine Croff Bell, vice president and chief scientist, E/V Nautilus Exploration Program, Ocean Exploration Trust.

The Nautilus is equipped with remote controlled vehicles (Hercules, Argus, Diana and Echo) that can descend to depths up to 4,000 meters (2.5 miles). The vehicles, which are operated by Ballard’s Institute for Exploration, house an array of cameras and acoustic sensors that are used to gather video and other data during each dive. Members of the public can watch the dives and listen to researchers’ comments in real time via the Nautilus Live website (www.nautiluslive.org), which transmits live video and other data from the expedition 24 hours a day, 7 days a week.

While Karson is on board, members of the SU community can watch the Nautilus researchers at work on a large screen set up at the Exploration Control and Command Center in Heroy Geology Laboratory, Room 115. Additionally, Karson will be available to answer questions about the exploration via email or the Nautilus Live website while he is on board. Karson is a member of the NOAA Nautilus advisory board.

The Oct. 8 to 19 leg of the voyage will focus on the Gorringe Bank, a series of submarine mountains formed as a result of two tectonic plates sliding into and past each other along the Azores-Gibraltar plate boundary. The Bank includes two significant mountain peaks—the Gettysburg (located 20 meters below sea level) and the Ormond (located 33 meters below sea level). The research team will be searching for hydrothermal vents (underwater hot springs) similar to those found in the Lost City hydrothermal field in the mid-Atlantic 11 years ago. The team will also be investigating unusual life forms and exploring shipwrecks and other ancient artifacts that might be resting on the sea floor.

Karson was part of the National Science Foundation funded research effort that led to the discovery and follow-up investigations of the Lost City site. The hydrothermal vents at the Lost City are unique from other deep-ocean hot springs in that the heat that drives the circulation of fluid in the rocks is caused by a chemical reaction between the seawater and magnesium-rich rocks found in the Earth’s mantle, called serpentinization. The vents also have distinctive fluid chemistry, vent structures, and ecosystems.

The 2011 New Frontiers in Ocean Exploration expedition will continue through November to the Straits of Sicily to explore the Aeolian Arc volcanoes and conclude with an exploration of submarine canyons along the Israeli continental shelf.