In solid materials with regular atomic structures, figuring out where the material will break under stress is relatively easy. But for disordered solids, like glass or sand, their disordered structure makes such predictions a more daunting task. 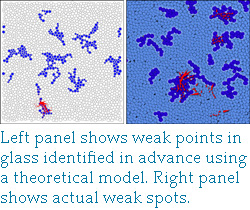 A collaboration of researchers has combined a theoretical model with a first-of-its kind experiment to demonstrate a novel method for identifying “soft spots” in such materials. The findings of physicists from Syracuse University and the University of Pennsylvania, which are published online in separate studies in Physical Review Letters, may lead to a better understanding of the principles that govern the responses of materials under stress, ranging from failure of glass to earthquakes and avalanches.

Lisa Manning, newly appointed to the Physics Department in SU’s College of Arts and Sciences, described the theoretical model with Andrea J. Liu, professor of physics in Penn’s School of Arts and Sciences. Manning’s work on the study was done while she was a postdoctoral fellow at Princeton University’s Center for Theoretical Science. Professor Arjun G. Yodh of the University of Pennsylvania led the team that did the experimental research.

For materials with well-ordered, crystalline internal structures, such as diamonds or most metals, identifying soft spots is easy; weak, disordered sections stick out like a sore thumb, the researchers say.

“In perfect crystalline materials, atoms are in well-defined positions,” Yodh says. “If you give me the position of one atom, I can tell you the position of another with precision. There’s also a well defined theory about what’s happening with defects in crystals when stresses are applied to them.”

The same is not true for disordered solids, such as glass and sand. With physical structure a dead end for identifying soft spots in disordered solids, the physicists turned to another property: vibration. Particles that make up solid matter are constantly vibrating. And like the different tones of guitar strings, particles vibrate in many different ways, known as “vibration modes.”

For crystalline materials, the regular patterns of atoms lead to uniform patterns of vibrations. In contrast, with disordered materials, particles in different regions vibrate differently, producing some new and different vibration modes, particularly at low frequencies.

Manning and Liu developed a simulation to test this kind of correlation under idealized conditions. They were able to show that certain regions highlighted by low-frequency vibration modes acted like defects in disorganized materials and that these defects were good candidates for where the material would fail under stress.

“We showed, for the first time, a correlation between the soft spot population and rearrangements under stress,” Manning says. “This is something people have been looking for over the past 30 or 40 years.”

Though the success of the simulation was an exciting result by itself, it was only a first step. Real-world systems have additional layers of complexity, notably temperature and related thermal fluctuations that can rapidly change the interactions between neighboring particles and thus the system’s vibrational patterns.

To see if this was the case, Yodh’s research team developed a novel way to test the findings of the simulation. At the core of the experiment was a colloidal glass, an effectively two-dimensional material consisting of a single disordered layer of soft plastic particles packed tightly together.

By analyzing video of the particles’ motion in the colloidal glass as observed under a microscope, the researchers calculated the vibrational patterns and then used Manning and Liu’s model to locate regions vulnerable to rearrangement once the glass was put under stress. They found a consistency between the weak spots predicted by the model and that which was found in the experiment. The experiment thus provides a new basis—low frequency vibration modes—for analyzing real-world disordered solids. Disordered solids are much more common than ordered ones, so having a working theory of how, why and where they break has many potential applications.

“You can bend a metal spoon, but you can’t bend one made out of glass without breaking it. If you can understand how disordered solids fail, you might be able to make them tougher,” Yodh says.

The research was funded by the National Science Foundation, the Penn Materials Research Science and Engineering Center, Princeton’s Center for Theoretical Science, NASA and the U.S. Department of Energy.