The Syracuse Student Sandbox is an incubator that helps aspiring young entrepreneurs move their ventures from the idea phase to a viable company. The Sandbox provides each team with a workspace, resources and access to five mentors in areas such as business development, design and law. 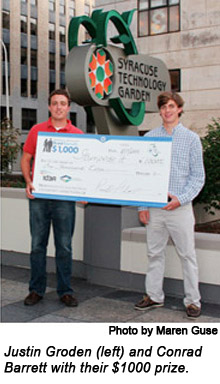 In its third year of hosting summer teams, the Sandbox has a strong track record. Forty percent of Sandbox companies are still in business, and of those, nearly three-quarters have chosen to stay in the Upstate New York region.

Standing on a stage in the AXA tower adjacent to the Tech Garden building in downtown Syracuse, each team was given five minutes to pitch their business idea to an audience of more than 200 venture capitalists, investors, academics and business people. The winning team, based on judges’ votes as well as audience votes, would receive $1,000.

The winner was Stampede.It, a web-based company that offers discounts on digital merchandise based on a group discount. Similar in practice to the popular deals site Groupon, Stampede.It focuses on digital content like games, apps and e-books.

Stampede.It is the brainchild of Justin Groden and Conrad Barrett. Groden is a 2008 graduate of Clarkson University, and Barrett is finishing up his studies at Monroe Community College and plans to head on to New York University.

The Syracuse Student Sandbox is part of the Raymond von Dran Innovation and Disruptive Entrepreneurship Accelerator (IDEA), and is sponsored at Syracuse University by the School of Information Studies, the College of Visual and Performing Arts and the Whitman School of Management, and through an Enitiative award. Enitiative is funded by a grant from the Ewing Marion Kauffman Foundation of Kansas City, Mo., focusing on entrepreneurship in the arts, technology and neighborhoods.