How hot did Earth get in the past?

The question seems simple enough: What happens to the Earth’s temperature when atmospheric carbon dioxide levels increase? The answer is elusive. However, clues are hidden in the fossil record. A new study by researchers from Syracuse and Yale universities provides a much clearer picture of the Earth’s temperature approximately 50 million years ago when CO2 concentrations were higher than today. The results may shed light on what to expect in the future if CO2 levels keep rising. 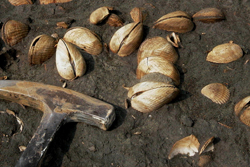 The study, which for the first time compared multiple geochemical and temperature proxies to determine mean annual and seasonal temperatures, is published online in the journal Geology, the premier publication of the Geological Society of America, and is forthcoming in print Aug. 1.

SU Alumnus Caitlin Keating-Bitonti ’09 is the corresponding author of the study. She conducted the research as an undergraduate student under the guidance of Linda Ivany, associate professor of earth sciences, and Scott Samson, professor of earth sciences, both in Syracuse University’s College of Arts and Sciences. Early results led the team to bring in Hagit Affek, assistant professor of geology and geophysics at Yale University, and Yale Ph.D. candidate Peter Douglas for collaborative study. The National Science Foundation and the American Chemical Society funded the research.

“The early Eocene Epoch (50 million years ago) was about as warm as the Earth has been over the past 65 million years, since the extinction of the dinosaurs,” Ivany says. “There were crocodiles above the Arctic Circle and palm trees in Alaska. The questions we are trying to answer are how much warmer was it at different latitudes and how can that information be used to project future temperatures based on what we know about CO2 levels?”

Previous studies have suggested that the polar regions (high-latitude areas) during the Eocene were very hot—greater than 30 degrees centigrade (86 degrees Fahrenheit). However, because the sun’s rays are strongest at the Earth’s equator, tropical and subtropical areas (lower latitude) will always be at least as warm as polar areas, if not hotter. Until now, temperature data for subtropical regions were limited.

The SU and Yale research team found that average Eocene water temperature along the subtropical U.S. Gulf Coast hovered around 27 degrees centigrade (80 degrees Fahrenheit), slightly cooler than earlier studies predicted. Modern temperatures in the study area average 75 degrees Fahrenheit. Additionally, the scientists discovered that, during the Eocene, temperatures in the study area did not change more than 3 to 5 degrees centigrade across seasons, whereas today, the area’s seasonal temperatures fluctuate by 12 degrees centigrade. The new results indicate that the polar and sub-polar regions, while still very warm, could not have been quite as hot as previously suggested.

The findings are based on a chemical analysis of the growth rings of the shells of fossilized bivalve mollusks and on the organic materials trapped in the sediment packed inside the shells, which was conducted by Keating-Bitonti and her colleagues. Ivany collected the fossils from sediment layers exposed along the Tombigbee River in Alabama. The mollusks lived in a near-shore marine environment during a time when the sea level was higher and the ocean flooded much of southern Alabama. The sediments that accumulated there contain one of the richest and best-preserved fossil records in the country.

“Our study shows that previous estimates of temperatures during the early Eocene were likely overestimated, especially at higher latitudes near the poles,” Keating-Bitonti says. “The study does not mean elevated atmospheric CO2 levels did not produce a greenhouse effect—the Earth was clearly hotter during the early Eocene. Our results support predictions that increasing levels of atmospheric CO2 will result in a warmer climate with less seasonality across the globe.”

To determine the average seasonal temperatures in the study area, Keating-Bitonti sampled the mollusk shells for high-resolution oxygen and strontium isotope analyses, which were done at SU. The Yale team analyzed shells and sediments for clumped-isotope and tetraether-lipid analysis. The results were consistent across all of the independent analytic methods. The scientists believe the multiple methods of analysis have yielded a more complete and accurate picture of ancient climate than previously possible.

“Clumped isotopes is a new way to measure past temperatures that offers a distinct advantage over other approaches because the technique requires fewer assumptions; it’s based on well understood physics,” Affek says. “The agreement among different methods gives us confidence in the results and enables us to use these methods in other locations, such as Antarctica.”

Keating-Bitonti recently completed a master’s degree in geology at the University of Wisconsin and will be continuing her studies at Stanford University as a Ph.D. student in the Department of Geological and Environmental Sciences, School of Earth Sciences.