A discovery by a team of researchers led by a Syracuse University physicist sheds new light on how the vision process is initiated. For almost 50 years, scientists have believed that light signals could not be initiated unless special light-receptor molecules in the retinal cells first changed their shape in a process called isomerization. However, the SU research team, which includes researchers from Columbia University, has demonstrated that visual signals can be initiated in the absence of isomerization. 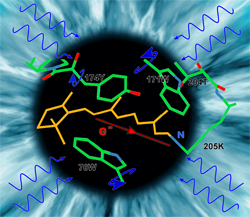 “We have demonstrated that chromophores (light-absorbing substances in retinal photoreceptor molecules), do not have to change shape in order to trigger the visual signal,” says Kenneth Foster, professor of physics in The College of Arts and Sciences. “The shape-change that results from isomerization is actually the second step in the process. Historically, scientists have focused on isomerization without realizing there is an earlier and more crucial first step.”

The research was published online June 23 in the journal Chemistry and Biology and is the cover article for the print version to appear June 24. The work was done in collaboration with Juree Saranak, research assistant professor in the Department of Physics; and Koji Nakanishi, professor of chemistry at Columbia University. Nakanishi’s group was responsible for the synthetic chemistry that went into the compounds tested at SU. The National Institutes of Health funded the research.

Chromophores absorb light after it enters the eye, setting off an extremely rapid series of complex molecular changes that enable light signals to be transmitted to, and interpreted by, the brain so that we can visually perceive the world around us. Visual chromophores are composed of retinal (a type of vitamin A), which attaches to a protein (opsin) to form rhodopsin.

Foster’s team of researchers discovered that the visual process is initiated by the redistribution of electrons on the chromophores, which occurs during the first few femtoseconds (one-quadrillionth of a second) after light enters the eye. Their experiments showed that when a chromophore absorbs a photon of light, electrons move from the chromophore’s “free” end to the place where it attaches to opsin. The movement of the electrons causes a change in the electrical field surrounding the chromophore. That change is detected by nearby amino acids that are highly sensitive to changes in the electrical field. These amino acids, in turn, signal the rest of the rhodopsin molecule to initiate the visual process.

“We found that the complete blocking of isomerization of the chromophore does not preclude vision in our model organism,” Foster says. “The signal is triggered as a result of an electronic coupling instead of a geometric change in the chromophore’s structure, as previously hypothesized. We believe this is a universal mechanism that activates all rhodopsins present in organisms from bacteria to mammals.”

Foster attributes his findings to new technologies and scientific information not available 50 years ago, when scientists first tried to understand how people see. “Fifty years ago, scientists had little knowledge of the structure of rhodopsins,” he says. “Advances in technology have enabled scientists to determine the rhodopsin structure at the level of the amino acids, which enables us to design sensitive experiments to test our hypotheses.”