They can be found everywhere—organized communities of bacteria sticking to surfaces both inside and outside the body. These biofilms are responsible for some of the most virulent, antibiotic-resistant infections in humans; however, scientific understanding of how these communities develop is lacking. 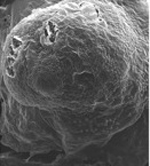 A recent study led by a Syracuse University biologist sheds new light on the process. The scientists discovered that a complex cascade of enhancer binding proteins (EBPs) is responsible for turning on genes that initiate the formation of a biofilm. The study was published June 13 in the Proceedings of the National Academy of Sciences, one of the world’s most-cited multidisciplinary scientific serials. The National Science Foundation is funding the research.

“We’ve discovered a complex regulatory cascade of EBPs that is designed to be highly responsive to environmental signals,” says Anthony Garza, associate professor of biology in SU’s College of Arts and Sciences and corresponding author for the study. “The regulatory circuit we identified is very different from that which has previously been seen.” Garza’s research team includes scientists from the University of Miami School of Medicine, the University of Wisconsin-Madison and Stanford University School of Medicine.

Garza’s team discovered that the regulatory network that signals biofilm development is quite complex and akin to that which is normally found in higher organisms. “Bacterial cells that form biofilms require cooperative behavior similar to cells in more complex organisms,” he says. “We knew EBPs were important in initiating biofilm development, and that there was a connection between EBPs and specific biofilm genes. But we didn’t know how the EBP regulatory circuit was put together.” Garza’s team has also begun to identify the signals that activate the EBP circuitry and the corresponding biofilm genes. Those studies are forthcoming.

The work to uncover how biofilms are genetically initiated is key to developing new ways to prevent and/or treat infected surfaces, Garza says. Bacteria are stimulated to organize into biofilms by several mechanisms, including starvation, high nutrient levels, tissue recognition and quorum or cell-density signaling. Because it takes a lot of energy to organize, bacteria need to be certain conditions are optimal before initiating the biofilm process.

For example, Garza explains, bacterial cells can recognize desirable host tissue, such as lung tissue. Once there, the cells look around to see if enough of their buddies are around to form a biofilm. In this case, both tissue recognition and quorum signaling is at work in initiating the process.

“Unfortunately, biofilms can be up to a thousand times more antibiotic resistant than free-living bacteria,” Garza says. “Once established, biofilms are extremely resistant to killing agents—chemicals, cleaners, antibiotics. The key to preventing their development is in understanding how they get started.”