“Do you want to go to Ethiopia?” The question came during a winter break phone call to Caithlin MacNeil, a second-year audiology graduate student, from a faculty member she had recently worked with on a research project. The phone call turned MacNeil’s world upside down, as she scrambled to prepare for a trip that would solidify her commitment both to her chosen profession and to giving back to the community. 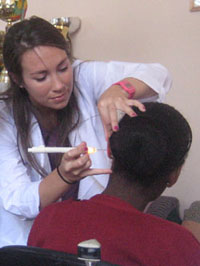 The call came from Karen Doherty, professor of audiology in Syracuse University’s College of Arts and Sciences. MacNeil is enrolled in the doctor of audiology program (Au.D.) in the college’s Department of Communication Sciences and Disorders. She had worked with Doherty on a yearlong study at SUNY Upstate Medical University in which hearing-impaired older patients—most of whom did not wear hearing aids—were taught to use assistive listening devices (ALD) during their hospital stay.

During their long walks from the SU campus to University Hospital, the pair talked about their shared passion for finding ways to give back to the community. Doherty told MacNeil about the humanitarian missions to Nicaragua in which she had participated. In January, Doherty got a call from Healing the Children Greater Philadelphia Chapter (HTC). The group needed a second audiologist for an upcoming trip to Ethiopia and was willing to take a highly capable student. HTC is a nonprofit humanitarian organization that secures donated medical and surgical care for children who are in need.

“It was the best surprise ever,” MacNeil says of Doherty’s mid-winter call. Eight weeks later, MacNeil was on a plane headed for Addis Ababa, Ethiopia’s capital city. The next 10 days turned out to be the most intensive, yet rewarding, period of her academic career. MacNeil worked with Amber Morgan, an audiologist from Texas who was a veteran of HTC-Philadelphia’s Ethiopian trips. Every six months an HTC team of surgeons, nurses and audiologists travels to Ethiopia to provide services for children in collaboration with Black Lion Hospital, CURE Hospital and the Makanissa School for the Deaf.

MacNeil’s role was to do pre- and post-operative hearing evaluations and fit hearing aids on children at the hospitals’ clinics and those enrolled in the school for the deaf. She and Morgan were out the door by 6:30 a.m. and didn’t return to their hotel until dinnertime. “It was one of the most fulfilling experiences of my life,” says MacNeil, who plans to return to Ethiopia with HTC Philadelphia in March 2012 to work again with Morgan.

MacNeil, who graduated from the State University of New York at New Paltz with a bachelor’s degree in biology, was inspired to become an audiologist after her mother was stricken with otosclerosis, abnormal bone growth in the middle ear that causes hearing loss. She struck up a friendship with her mother’s audiologist, who talked passionately about the field and the newborn hearing-screening program he set up in Belize.

“It was an epiphany moment,” MacNeil says. “I wanted a career in health care; I had studied American Sign Language and deaf culture in high school and college, and I had worked with speech-language pathology and audiology majors at New Paltz. It all just clicked.”

MacNeil will graduate in 2012. She will spend the next several months preparing for her audiology comprehensive exams and conclude her academic career with an externship at the Mayo Clinic in Scottsdale, Ariz.