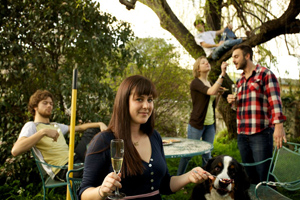 Fans are advised to arrive early as the Jabberwocky is SU’s most intimate performance venue and seating will be limited.

The band is a great addition to the Showcase lineup as it has taken an eco-friendly approach to its music and touring. Big Tree cruises to its gigs in a diesel van converted to run on used vegetable oil. The members are big on sustainability and promoting alternative fuels. The easygoing group will often give “grease talks” during their travels to demo how they fuel up their van with veggie oil.

Daytrottr.com described Big Tree as a “… mood-inducing, mood-furthering band …” According to Performing Songwriter Magazine, “Big Tree is a genre-bending, five-piece bundle of energy … fresh and quirky.”

Big Tree has shared the stage with Pomegranates, Deer Tick, Megafaun, Akron/Family and OneRepublic. Big Tree celebrated its June 2010 title of NYC Deli Magazine Band of the Month, and had a successful release of its Home(here) EP last summer.

SU Showcase just announced its Showcase Fellows lineup and released its full schedule of events slated for May 2. For information on participating in SU Showcase, including volunteering to help run the day’s activities, visit http://sushowcase.syr.edu/Registration_2011.html.