James Balog, photographer and director of the Extreme Ice Survey, will share his stunning images of climate change in high definition projection during the next University Lectures presentation at Syracuse University on Tuesday, March 8. 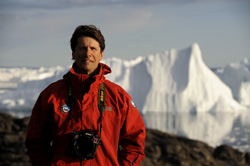 Balog’s presentation will begin at 7:30 p.m. in Hendricks Chapel. The lecture, sponsored in cooperation with the Geoffrey O. Seltzer Lecture in The College of Arts and Sciences, is free and open to the public; reduced-rate parking is available in the Irving Avenue parking garage. CART and sign language interpretation will be offered during the presentation.

Balog will also speak to more than 1,000 local middle-school students the following morning at Hendricks Chapel.

The Extreme Ice Survey is a monumental look at the impact that climate change is having on the world’s glaciers. In September 2010, Balog was named a recipient of the prestigious Heinz Award for his environmental work.

Shocked by the changes he saw while shooting the June 2007 National Geographic cover story on melting glaciers, Balog, who has a graduate degree in geomorphology, founded the most wide-ranging glacier study ever conducted, using innovative time-lapse video and conventional photography at sites in Alaska, Greenland, Iceland and the northern U.S. Rockies.

For nearly 30 years, Balog has broken new ground in the art of photographing nature. He has received numerous awards, including the Leica Medal of Excellence, the Rowell Award for the Art of Adventure, the first-ever International League of Conservation Photographers Award for Conservation Photography, the Aspen Institute’s Visual Arts and Design Award and the North American Nature Photography Association’s Outstanding Photographer of the Year award.

His photographs have been exhibited at more than 100 museums and galleries from Paris to Los Angeles. Balog is the author of seven books, the most recent of which is “Extreme Ice Now: Vanishing Glaciers and Changing Climate: A Progress Report,” released by National Geographic Books in March 2009. His images are regularly published in The New Yorker, National Geographic, Life, American Photo, Vanity Fair, Sierra, Audubon and Outside, and he is a contributing editor for National Geographic Adventure.

Other scheduled presentations for the spring semester are Karen Tse, human rights attorney, founder and director of International Bridges for Justice (March 22); and Maude Barlow, co-founder of the Blue Planet Project and chair of the Food and Water Watch (April 5).

The Geoffrey O. Seltzer Lecture Series was established in memory of Seltzer, an internationally recognized researcher in paleoclimatology and member of the faculty of the Department of Earth Sciences in the College of Arts and Sciences before his death in 2005 at age 45. The lecture series is made possible through the generosity of Seltzer’s family, friends and colleagues.