The Reformed Church of Syracuse has struggled to get a website for four years. After four months of working with students from the SU School of Information Studies “Digital iCreation” (IST 400) course, the church now has an innovative website that includes a short video, which captures the essence of the organization, according to Pastor Lucie Perkins. 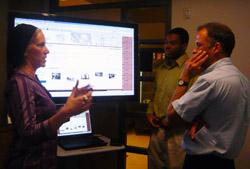 “When I previewed the website, I was in awe,” Perkins says. “Working with the students, we were pushed to articulate our focus in a more marketable way. The students then put together that message with images of us on Sunday mornings.”

The Reform Church of Syracuse website was one of seven group projects that were presented May 4 during the final class meeting of “Digital iCreation” in the iSchool’s Innovation Studio. About 50 students, professors and representatives from local organizations came to see the students’ final coursework presentations.

The “Digital iCreation” course, taught by iSchool professor Marilyn Arnone, uses information media to solve real problems for local nonprofit organizations. Students in the class were placed in teams and paired with an organization, where they focused on a specific problem to solve throughout the semester.

Each student created an iPortfolio, a personal website showcasing their work throughout the semester, using Google Sites. The final presentations consisted of newly designed websites for seven organizations that featured at least one video that told the organization’s story through images. The participating organizations were the CNY Chapter of the Alzheimer’s Association, the Brady Faith Center, The Café Plus, the Jail Ministry of Syracuse, the Reformed Church of Syracuse, the 15th Ward and The Matilda Joslyn Gage Foundation.

Quawan Smith ’11, an information management and technology major at the iSchool, acted as emcee for the event. “It was a long and hard journey, but it was worthwhile,” Smith says. Five students shared their personal struggles with the course and what they learned through short videos.

In her video, Shander Bawden G’11, a first-year graduate student in the library and information science program, showed images of herself where she appeared to be overwhelmed and frustrated. She said the course allowed her to learn what type of learner she is. “I discovered I am a perfectionist and had to work around that,” Bawden says. “I am amazed at how much I learned in such a short time. It went by too fast.”

While most of the students benefited from working with the real organizations and solving real problems, Jerrell Perry ’10, an information management and technology major and an Orange Tree Fund recipient, took the class a step further. Perry applied the new techniques he was learning to the student start-up with which he works, Jamlynx. Jamlynx is a gaming platform and social networking site that enables musicians to use their real instruments as game controllers to collaborate and compete with other musicians online. During his video, Perry told the audience that the knowledge and skills he learned in the “Digital iCreation” class contributed greatly to his company receiving the Orange Tree Fund award.

Representatives from the nonprofit organizations who collaborated with the students throughout the semester are excited about their new websites and impressed with the professionalism of the students.

“We wanted to tell the story of our social day program,” says Katherine James, CEO of the Alzheimer’s Association. “The students were unobtrusive and learned as much about Alzheimer’s as they could in order to tell our story accurately through pictures and video.”

Many of the organizations hope to continue to work with SU students in future semesters.

To visit these organizations’ websites and see the students’ work first-hand, visit the course website at http://www.digitalicreation.org/.  Read an account of the course from a student’s perspective on the iSchool blog, Information Space (http://infospace.ischool.syr.edu/).

The course was developed through a grant from Imagining America, a national consortium of more than 80 colleges and universities committed to public scholarship in the arts, humanities and design.