Syracuse University has been named one of the 2010 Green 15 by GDC’s InfoWorld for the University’s innovative Green Data Center (GDC). The annual Green 15 award recognizes the 15 most innovative IT initiatives of organizations around the world that have embraced green technology to drive projects and develop products aimed at boosting energy efficiency, trimming waste, and reducing or eliminating the use or the production of harmful substances. 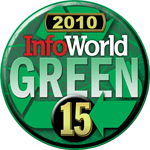 A collaboration of SU, IBM and New York State, the GDC has been hailed as one of the world’s greenest computer centers, designed to use about 50 percent less energy than a typical data center. The $12.4 million, 12,000-square-foot facility (6,000 square feet of infrastructure space and 6,000 square feet of raised-floor data center space) was completed in early December 2009 and became fully operational earlier this month.

The GDC is used by SU as its primary computing facility and by IBM as a showcase to demonstrate how energy-efficient technologies can reduce energy costs and environmental impact.

InfoWorld cites several favorable attributes of the GDC, including:

• its unique direct current (DC) power distribution system that doesn’t require the wasteful power conversion of typical alternating current (AC)-powered data centers;
• its use of energy-efficient IBM Power 575 and z10 servers;
• the facility’s reduced environmental footprint, resulting from floor space that normally would have been required for AC-DC conversion equipment but is not necessary with the GDC’s end-to-end DC environment;
• fewer resources expended on building construction due to the less floor space;
• the GDC’s on-site electrical tri-generation system using natural gas-fueled microturbines to generate all of the electricity for the center and cooling for the computer servers;
• a liquid cooling system that uses double-effect absorption chillers to convert heat exhaust from the generator into chilled water to cool not only the servers but an adjoining building (the 621 Skytop Road building);
• server racks with “cooling doors” that use the chilled water to remove heat from each rack in a way more efficient than is offered by conventional room-cooling methods; and
• a sensor system that monitors server temperatures and usage to tailor the amount of cooling delivered to the servers, further improving efficiency.

“This facility is a prime example of Scholarship in Action at SU: We paired faculty and students with IT and facilities staff and demonstrated—with our own production systems—new ways of delivering data center efficiency,” says Christopher Sedore, SU vice president for information technology and chief information officer.

• Aflac, for its paperless practices;
• Andrha Pradesh, India, for its use of virtual desktops in school computer labs;
• Consortium Laval, Universite du Quebec, McGill and Eastern Quebec (CLUMEQ), for converting a circular concrete silo into a cooling enclosure for its supercomputer;
• Dell, for retiring 7,000 useless or redundant apps;
• U.S. Environmental Protection Agency, for its Energy Star specifications for servers and data centers;
• Ericsson, for its greener supply chain;
• Intel, for successfully reducing the size of its server pool by 5,000 machines;
• Iron Mountain, for its construction of a state-of-the-art underground data center in a former limestone mine;
• KPMG, for savings accrued by telepresence;
• Palo Alto, Calif., for its unified management approach in monitoring sustainability efforts;
• Provider Enterprises, for fuel savings of its fleet of vehicles;
• Raytheon, for its company-wide sustainability efforts and specific energy-saving activities at McMurdo station in Antarctica;
• Standard Bank, for replacing PCs with low-power virtual clients to reduce strain on its air conditioning system; and
• State Street, for its numerous green initiatives.

“This year’s crop of Green 15 winners demonstrates how organizations of all sizes are finding innovative ways to use information technology to achieve critical and often complementary environmental and business objectives,” says Ted Sampson, InfoWorld senior analyst. “Increasingly, companies are moving beyond out-of-the-box products and siloed approaches to making IT itself greener. Rather, they’re leveraging technology as part of a broader, holistic effort to make operations as a whole greener.”