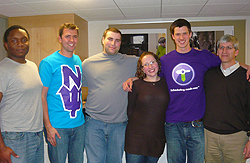 When attending the internationally known and highly regarded South by Southwest (SXSW) festivals in Austin, Texas, ask questions and say yes. That’s the advice that three Syracuse University School of Information Studies (iSchool) students shared with some 60 campus and community members in a recent presentation.

At the same event, iSchool Dean Elizabeth D. Liddy announced a contest for students to win their way to next year’s SXSW. More details will follow about the contest in fall 2010.

Shay Colson G’10, Andrew Farrah G’11 and Kate Holloway G’11, students enrolled in the M.S. in information management program, traveled to the five-day SXSW Interactive Festival for Spring Break and experienced as much as they could during the mind-opening trip.

“Everyone is your peer at South by,” Colson says. “Everyone is wearing jeans and a T-shirt. He might be the head of a company you use every day, but at SXSW he’s just another attendee. There are no barriers here. People want to interact. That’s why they fly in from all around the world at the same place, at the same time. This is your chance to talk to these people as a peer.”

For example, Colson, Farrah and Holloway met and took a photograph with billionaire entrepreneur Mark Cuban, who owns the Dallas Mavericks and is chairman of HDNet, a high-definition TV Cable network.

“The world should be like this,” Farrah says. “Free Wi-Fi, public computers, cool tech like this, and everyone is approachable. It’s this ideal techie world—like a bubble—where everybody knows what you’re talking about and everybody wants to be part of the party.”

Holloway, who holds a master’s degree in journalism from the S.I. Newhouse School of Public Communications, says she participated in a lot of conversations about media and how technologies are shaping the future. “I was really excited to see spot.us and Jeff Jarvis [journalist who wrote the book “What Would Google Do”],” she says. “I got to talk with these people.”

The three students also met Jason Fried, owner of 37signals, which developed such collaborative software as Basecamp. And they were impressed to learn that his company has three million customers and only 16 employees worldwide.

“It was great hearing from people who are doing it big,” Colson says. “This is a pretty incredible event.”

The students ended their presentation by posing the question to attendees: How do we foster a similarly innovative and open environment here?

iSchool professor Michael D’Eredita suggested that the conversation continue at future events, including the April 28 Emerging Talk at the Syracuse Technology Garden. That event is bringing together student start-ups from across Central New York with other entrepreneurs and professionals to discuss innovation and creating new businesses in the region.