A team of scientists from the international Cryogenic Dark Matter Search experiment (CDMS), which includes physicists from Syracuse University, has identified two events in a new analysis of experimental data that have characteristics consistent with particles that make up dark matter. The latest findings were published Feb. 11 in Science Express, which publishes selected papers from the journal Science online in advance of print. 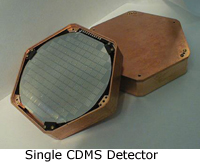 Dark matter does not emit or reflect light, but scientists believe that it makes up 85 percent of the matter in the Universe. “Dark matter is the glue that holds galaxies together,” says Richard Schnee, assistant professor of physics in SU’s College of Arts and Sciences. Schnee is the science coordinator for the CDMS experiment, a large-scale collaboration of 18 institutions, funded by the U.S. Department of Energy (DOE) and the National Science Foundation (NSF).

Schnee’s research group in the Department of Physics played a significant role in the project by helping to rewrite the software that was used to analyze that new data. The new software improved the ability of scientists to distinguish between background noise and signals that could be coming from dark matter. At SU, Mark Kos, a postdoctoral researcher, worked on the software redevelopment project with assistance from Joseph Kiveni, a physics graduate student.

Dark matter may be composed of weakly interacting massive particles (WIMPs). WIMPs would travel across space and time through ordinary matter, rarely leaving a trace. For example, scientists believe as many as 10 trillion WIMPs pass through one kilogram of earth per second, but perhaps as few as one per day will actually collide with an atomic nucleus and then bounce off. The event would produce a distinct signal or wave pattern, which scientists are searching for in the experimental data.

“This is the most sensitive CDMS experiment we have done so far,” Schnee says. “We saw two events. The last time we ran the experiment, we saw no events. This raises the possibility that at least one of the events could be a WIMP.”

While the new findings are promising, there is a chance that one or both signals could have been produced by background noise and not dark matter particles, CDMS scientists say. For the results to be considered as evidence of dark matter, there must be less than one chance in 1,000 that the observed events could be background noise. The latest result did not meet that test.

CDMS scientists are in the process of increasing the sensitivity of the detectors, which are housed in the Soudan Underground Laboratory, north of Duluth, Minn. They plan to re-run the experiments after the new detectors are in place later this year. They are hoping the increased sensitivity will enable them to find compelling evidence of dark matter.

The CDMS experiment has been searching for WIMPs since 2003. The experiment uses detectors made of crystals of germanium and silicon, which are cooled to temperatures near absolute zero. When particles hit the supercooled detectors, an electrical signal is produced. Special sensors detect these signals, which are then amplified and recorded for later data analysis.

The CDMS experiment includes more than 59 scientists and is managed by the DOE’s Fermi National Accelerator Laboratory. In addition to DOE and NSF funding, the experiment is supported by foreign funding agencies in Canada and Switzerland and from member institutions.