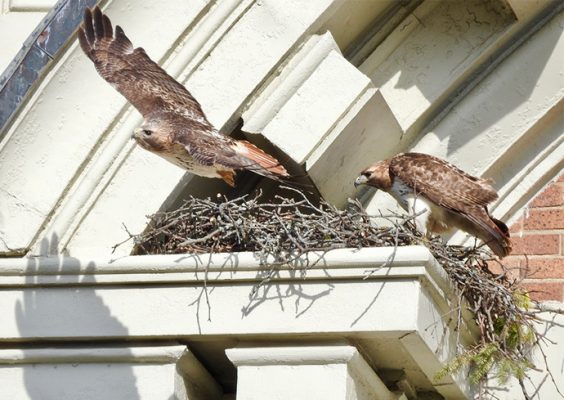 Sadly, Syracuse University’s resident red-tailed hawks, SU-Sue and Otto, have died. As a species that mate for life, SU-Sue and Otto called campus home since 2012. While their year-round hunting territory also covered the adjacent campus of SUNY College of Environmental Science and Forestry, the nearby Oakwood and Morningside cemeteries, Thornden Park and neighborhoods close to the University, it was on the Syracuse University campus where they built their nest each spring and raised their young.

This is a tragic loss for the pair’s admirers on campus, in the local community and around the world who have followed them and their 28 progeny since they began nesting at Syracuse University, via the Karel and Cindy Sedlacek Vimeo livestream since 2016, via the SU Hawk Nest Cam since 2017, and on the Facebook pages Syracuse Hawk Chatters and Red-Tailed Hawk Tales.

The Syracuse University red-tailed hawk nest cam was funded through a generous donation from alumna Anne Marie Higgins in loving memory of her husband, the Honorable Thomas W. Higgins, Jr., who died in 2009 after a brief battle with leukemia. Anne Marie and Thomas (aka “Tim”) were avid bird watchers, and hawks were their favorite raptors.

Perhaps fitting for two hawks that spent most of their lives together, SU-Sue and Otto passed away within a week of one another. On Friday, Jan. 13, around 5 p.m., SU-Sue was found on the ground near Huntington Beard Crouse Hall. She received emergency treatment for symptoms of head trauma but unfortunately did not survive. When a hawk dies, its mate typically finds a new companion, and Higgins thought this might be the case for Otto. But on Jan. 19, she received a report that another deceased hawk was discovered in Oakwood Cemetery. She arrived and confirmed it was Otto.

Higgins transported SU-Sue and Otto’s bodies to Cornell University Veterinary Medicine’s Animal Health Diagnostic Center in Ithaca, New York, for testing to determine the cause of each of their deaths. Those results are pending. No one is believed to have witnessed SU-Sue and Otto’s injuries but if anyone has information, please report it to the Department of Public Safety at 315.443.2224.

Since 2017, viewers worldwide have tuned into the 24/7 live feed of SU-Sue and Otto’s nest cam hosted on the College of Arts and Sciences’ website. The feed has given people a “bird’s eye view” of the hawk family’s adventures, from building each year’s nest to raising the hatchlings until they fledged (when juvenile hawks’ wing feathers are developed enough for flight).

It’s uncertain at this time whether any of their numerous offspring or other raptors will choose to nest on the Syracuse University campus, but SU-Sue and Otto will always be remembered for bringing the joy of discovery to those witnessing the lives of a real hawk family through the nest cam. For updates or to share your own personal stories about SU-Sue and Otto, visit the Red-Tailed Hawk Tales page on Facebook.