More than 2,000 members of the Syracuse University and greater Syracuse communities came together in the JMA Wireless Dome on Sunday, Jan. 22, to celebrate the legacy of the Rev. Dr. Martin Luther King Jr.

Syracuse University’s 38th Annual Rev. Dr. Martin Luther King Jr. Celebration looked back on the legacy of Dr. King and showcased how his legacy is being carried forth in the community today. 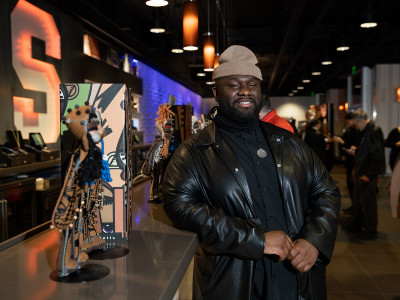 Artist Jaleel Campbell with his work (Photos by Angela Ryan)

The theme of the celebration, emceed by Iris St. Meran, reporter with NewsChannel 9, was “Civil Rights and the City of Syracuse.” The keynote speaker was the Rev. Phil Turner, pastor of Bethany Baptist Church in Syracuse.

“In choosing this theme, the planning team sought to highlight the timeless values that Martin Luther King Jr. taught through his example: the values of courage, truth, justice, compassion, dignity, humility and service. We want to apply that here and now in the City of Syracuse,” said Malique Lewis ’24, who served as co-chair of the celebration with the Rev. Brian Konkol, dean of Hendricks Chapel. “This annual celebration in general, and our 2023 theme in particular, is intended to be a direct expression of our collective commitment to foster and support an inclusive and accessible campus community.” 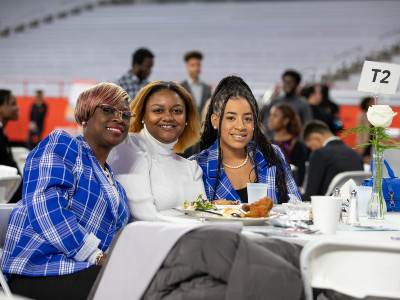 Guests enjoy the traditional dinner before the program.

Before his invocation, Dean Konkol asked those gathered to remember the loved ones of Brexialee Torres-Ortiz, an 11-year-old Syracuse resident shot and killed steps from her home on Jan. 16 after purchasing milk at the corner store.

“To honor her this evening, to comfort those both near and far who grieve the impact of violence and to compel all people of goodwill into action, I ask for a moment of silence,” he said.

Chancellor Kent Syverud, in his remarks, spoke of the 1961 speech that Dr. King made on the Syracuse University campus (Dr. King also spoke on campus in 1965).

“He said, among other things, this: ‘As a people, we will someday have to repent, not only the vitriolic words of bad people, but the silent indifference of the good.’ I find these words especially poignant today,” he said. 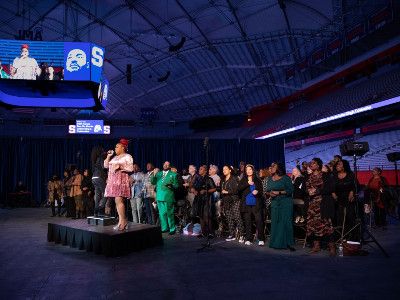 The MLK Community Choir performs during the program.

“There is no room for bystanders today. Each of us must play a role in confronting injustice and inequality and indifference,” Chancellor Syverud said. “For Dr. King, the definition of the American Dream was different from that of so many others in his time. He defined the dream as being about people, about being a place where all nationalities could live together as brothers.”

“That dream aligns with what we aspire to on this campus. We aspire to be a place that is genuinely welcoming to all,” he said.

Rev. Turner, in his keynote address, spoke on “Planting New Seeds and Cultivating a New Culture.” He talked of growing up in the South and reciting the Pledge of Allegiance and singing patriotic songs in his segregated school. “Like most people born in America, I was taught to love my country. While I was loving my country, I began to realize that the pledges in those songs were not intended to be shared with me. As a little boy, I was disheartened. … Where were the good and decent people and why didn’t they take a stand to stop this inhumane condition?” 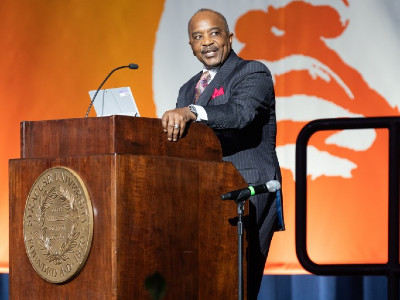 No problem has ever been solved that was neglected, Rev. Turner said. In 1960, George Wiley became one of the first African American faculty members at Syracuse University.  During that time, he became the founder and leader of the Syracuse chapter of the Congress of Racial Equality (CORE). Around the same time. Urban renewal projects and the construction of Interstate 81 led to the destruction of the city’s 15th Ward, Syracuse’s African American neighborhood. Members of the University community worked to help those who were disenfranchised, Rev. Turner said. In 1963, CORE created the Committee on Equality at Syracuse University to spotlight areas where civil  rights were violated. “There was nothing unique about racial conditions in Syracuse; it was simply a microcosm of racial issues in America,” Rev. Turner said.

In a 1967 speech at Stanford University, Dr. King spoke of two Americas—one of liberty and the pursuit of happiness and one with people mired in poverty. “As I researched these two Americas, I found that race is not a valid biological concept,” Rev. Turner said. “Race is a made-up social construct that gives or denies benefits and privileges based on skin color and other physical features.” 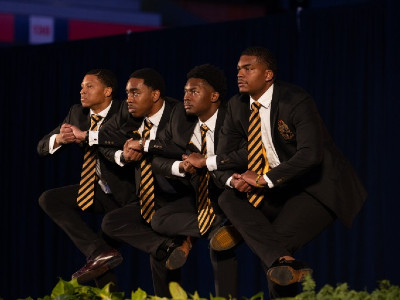 Brothers of Alpha Phi Alpha perform during the program.

“The time has come for untruths to be abandoned. The time has come and as untruths are abandoned, we must put truth in its place so we can begin to build a respectful and caring culture,” said Rev. Turner. “America was founded on seeds of untruth, and the motive was fueled by the pursuit of money, material gain and power. … “We’ve been trying to fix a racial divide that was designed to never be fixed. Therefore we must abandon what has grown from the seeds of untruths.

Throughout the evening performances were given by Eesa Grayson, the MLK Community Choir, the Royalty Step Team, Brianna Gilyard ’23 and Alpha Phi Alpha Fraternity.

One way Dr. King’s legacy is being carried forth is through the Unsung Hero Award recipients, community members, students, faculty and staff who have made a positive impact on the lives of others but are not widely recognized for their contributions. The awards were created to honor Dr. King’s vision of creating positive change in a troubled world.

The 2021 and 2022 Unsung Heroes were also recognized this year as they were unable to be recognized in person due to the COVID-19 pandemic.