During a life cut short by an assassin’s bullet, the late Dr. Martin Luther King Jr. addressed Syracuse University students and faculty on two separate occasions, displaying both his trademark oratorical prowess and his innate drive to give every person access to the American dream.

As the University prepares to honor the message, mission and legacy of Dr. King during the 38th Annual Rev. Dr. Martin Luther King Jr. Celebration on Sunday, Jan. 22, in the JMA Wireless Dome—the largest of its kind on any college campus—the celebration’s featured speaker, Reverend Phil Turner of Bethany Baptist Church in Syracuse, has spent countless hours researching Dr. King’s visits to Syracuse.

This year’s theme is “Civil Rights and the City of Syracuse,” and in devising his remarks, Turner has turned to the past, relying on the lessons and morals preached by King to Syracuse’s students and faculty during trips to Syracuse in the summers of 1961 and 1965 for inspiration.

“When Dr. King spoke, his words were so piercing because they came from truth, his inner light and compassion,” says Rev. Turner. “I want to communicate to the audience that there’s still hope for that unified American society that Dr. King spoke of. In America, our fixation on race, on power and on money causes us to miss the fact that what has always made America great, that which made our country what it is in the world, is its diverse population. That’s what caused America to stand out.” 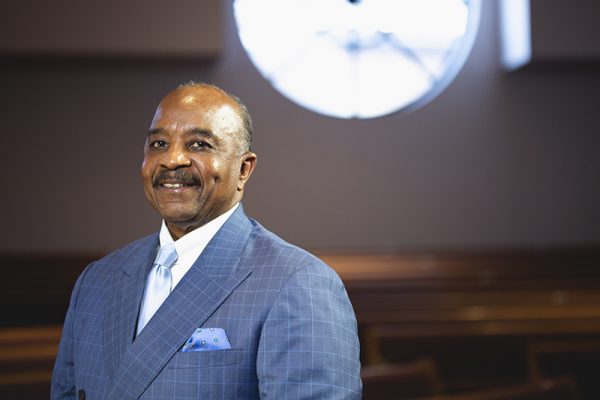 It’s a welcome task for Turner, who while remaining humble is proud to boast several similarities to Dr. King. Both men played instrumental roles in their church and in their communities. Both men share a birthday (April 15). Both men were passionate about lifting up their fellow Americans. And Turner was born in the same city (Memphis, Tennessee) where Dr. King was assassinated on April 4, 1968.

Dr. King first spoke on campus during a Summer Sessions Banquet lecture titled “Facing the Challenge of a New World,” in July of 1961 at Sadler Hall. Dr. King delved into the ideals America was built upon, and how the country was not doing its part to live up to the lofty standard it claimed to hold itself to.

There are tremendous similarities between this speech and Dr. King’s iconic “I have a Dream” speech, delivered in Washington, D.C., in 1963, including King telling the Syracuse audience “the arc of the moral universe is long but it bends toward justice,” before introducing a central theme that would gain worldwide notoriety two years later, dreaming of a day when the vast potential of the American dream could be fulfilled for all its citizens: 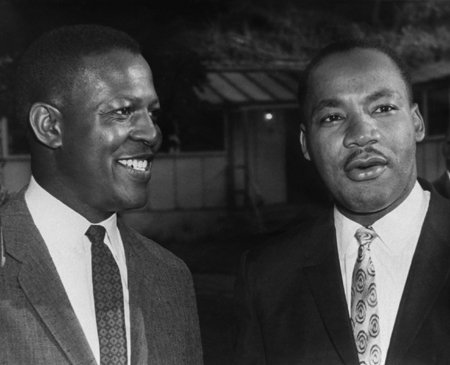 Professor Charles Willie, left, with Martin Luther King Jr. during Dr. King’s visit to Syracuse University in the summer of 1965

“This will be the day when all of God’s children, black and white … (Christians), Jews and gentiles, Protestants and Catholics …. will be able to join hands and sing in the words of the old Negro spiritual, ‘Free at last, free at last, thank God almighty: We are free at last,” Dr. King told the audience.

Four summers later, Dr. King returned to campus for a second Summer Sessions Banquet lecture, “The Time is Always Right to Do Right,” inside the old dining hall inside Sims Hall.

Dr. King explored the destructive impact of segregation in northern cities such as Syracuse, lamenting how future generations of Black children would suffer as a result of the harmful ramifications of these policies, combined with the “utterly low quality of education” in the country. [Check out Dr. King’s remarks from 1965].

These speeches play a vital role in the history of the City of Syracuse and serve as a stark reminder of how long the University has embraced the ideals preached by Dr. King, and how far the country still has to go to achieve King’s ultimate vision, according to Turner.

A Friend of the Underdog

Growing up in the Jim Crow south, Turner considered himself a “friend of the underdog,” oftentimes sticking up for children who were picked on by schoolyard bullies.

“I’ve always been in my natural element when I was striving for justice and equality, even as a child. I’ve always been disturbed when I see someone else getting treated unfairly. That’s an area of passion for me, the concern for equality and for human life, regardless of who the person is. As we see the divides that plague our country, I am inspired by the great commandment, to love your neighbor as yourself. That is the answer to our dividedness, but to be the agent of change requires courage,” Turner says.

Turner vividly remembers an intense sense of patriotism when he and his classmates would sing songs like “America (My Country, ’Tis of Thee),” “God Bless America” and the national anthem, “The Star-Spangled Banner.”

That love for country dissipated after Turner witnessed acts of overt racism against Black people in Memphis, and further deepened when his family moved to Buffalo, New York, where the racist behavior transitioned from overt to covert hatred and discrimination. He became disillusioned over the realization that the principles this country was founded upon varied greatly based on one’s skin color.

While Turner admits coming to terms with that hypocrisy was difficult, it also sparked a lifelong passion: He dedicated himself to a life of service as a religious leader.

Since being elected as the 12th pastor of Bethany Baptist Church on Feb. 19, 2007, Turner has fought to expand his congregation’s impact through membership growth, facility renovations, increased access to transportation services and improved engagement with civic organizations and community organizers.

Relying on Dr. King’s previous appearances on campus, Turner plans to deliver a message worthy of Dr. King’s vision, using his platform to motivate and inspire the MLK Celebration crowd.

“Hopefully, people will leave this celebration equipped with something that will help them become an agent of change in their communities, to move this world toward a place we want to live in, setting up our children and our descendants for a better world, the one Dr. King dreamed of.”

Tickets for the annual MLK Celebration dinner and program are now available.