When Ian McIntyre took over the Syracuse University men’s soccer program in 2010, the Orange won five matches combined over his first two seasons on the job.

But despite those lean early times, from the moment he assumed the role of head coach, McIntyre was focused on building up the Orange’s men’s soccer program, and on Dec. 12, his team reached the pinnacle.

The seeds for this successful postseason run were planted last year, and with many returning student-athletes who endured the growing pains of losing six one-goal games, McIntyre’s team won 11 more matches than it did last year, including sweeping the Atlantic Coast Conference’s (ACC) regular and postseason championships. 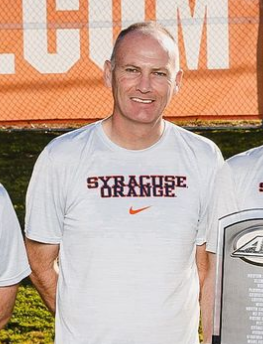 “We really started thinking about doing something not just magical, but legendary when we drove back from Clemson as ACC champions. It’s been a lot of fun to watch video and have videos shared with us of how much enjoyment there was on the field,” McIntyre says. “The drama and emotions that went with securing a national championship via a penalty shootout—it’s been a whirlwind the last few weeks. Very humbling to see just how everyone has embraced this terrific group of young men. And it was very special to bring a national championship back to Syracuse.”

McIntyre relives the night Syracuse was crowned champions of the collegiate soccer world, shares how his student-athletes and coaches celebrated their national title, recounts when he felt his team was capable of making a deep run in the postseason, discusses the vital role support from the campus community and alumni played in the team’s postseason run, and more!