Syracuse University Libraries’ Special Collections Research Center’s (SCRC) new exhibition, titled “A Love Supreme: Black Cultural Expression and Political Activism of the 1960s and 1970s” (A Love Supreme) will open on Thursday, Jan. 19, on the sixth floor of Bird Library and run through July. The exhibition will open with a reception that afternoon at 4:30 p.m. Those interested in attending should register via email to libevent@syr.edu. 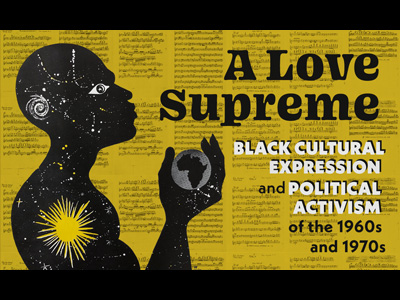 “A Love Supreme” reimagines the Black Power and Black Arts movements by intentionally unmuting a multitude of Black writers, leaders and artists from SCRC’s manuscript and archival collections as well as the rare book and printed materials collection.

Curated as a snapshot into the movements, materials within this exhibition expand dominant narratives of Black pride, love, strength, philosophy and power. On display are chapbooks from prominent Black publishing houses, such as Broadside Press and Third World Press, as well as a diverse selection of journals and periodicals from various creators from the period. Also featured are works produced by both well and little-known Black visual artists such as Emory Douglas, Masood Ali-Wilbert Warren, Carole Byard and the young students of Black nationalist educators. This exhibition and its call to “A Love Supreme,” the title of John Coltrane’s 1964 groundbreaking album, amplifies the intimacy of Black community, their visions of liberation and their expressions of supreme, everyday love.

The Black Arts Movement of the 1960s and 1970s, coined by scholar of African American theatre, cultural critic and playwright Larry Neal, was the “aesthetic and spiritual sister” of the Black Power Movement. The creators and activists of the movement understood that political activism and cultural expression were inseparable. They drew in equal parts from the teachings of Black nationalist leaders like el-Hajj Malik el-Shabazz (Malcolm X) and from the improvisational performance of Black free-jazz musicians like Coltrane. Black identity was reclaimed, recentered and reaffirmed inside writing, theater, music, education, visual art and more. A politic in and of itself, Blackness became a source of pride, power, philosophy and love that Black communities utilized to forge new pathways toward liberation.

“This exhibition, ‘A Love Supreme,’ is named after the mantra Coltrane repeats 19 times throughout his landmark jazz-suite of the same title. Our own call to ‘A Love Supreme’ is dedicated to the Black people who have been fighting, creating, living and improvising since our arrival in this hemisphere,” say co-curators Charles and Terry-Elliott. “Curating ‘A Love Supreme’ has been a collaborative improvisation. While being attentive to our respective training in English and history, we embraced an interdisciplinary spirit of collaboration, honoring the collaborative improvisation of the Black Arts Movement. Historically, institutional archives have ensured the preservation of white supremacy. ‘A Love Supreme’ recognizes that archives hold incredible potential for reorienting us toward social justice.”