Former Syracuse University football athletic trainer Denny Kellington is being praised for helping save the life of Buffalo Bills safety Damar Hamlin after Hamlin collapsed on the field in the first quarter of a “Monday Night Football” game vs. the Cincinnati Bengals.

Kellington, an assistant athletic trainer for the Bills, was part of a team of medical professionals on the sidelines at Paycor Stadium on Monday night when Hamlin, 24, went into cardiac arrest after tackling Cincinnati wide receiver Tee Higgins.

After Hamlin collapsed, Kellington took action, performing life-saving cardiopulmonary resuscitation (CPR) that, according to Albert Breer, a senior NFL reporter for Sports Illustrated, was “absolutely vital” and “a huge difference-maker” in bringing Hamlin back to life. 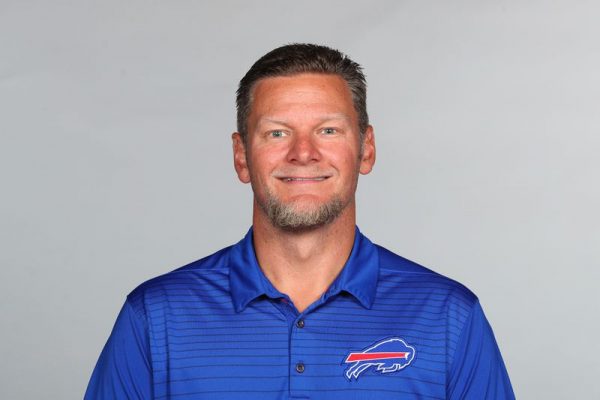 Kellington and the medical professionals worked to restore Hamlin’s heartbeat using CPR and an automated external defibrillator (AED) on the field. Hamlin’s heartbeat was restored after CPR was administered for more than eight minutes. He was given oxygen from a portable tank to help him breathe, according to the Bills, before being transported to the University of Cincinnati (UC) Medical Center in an ambulance.

“For (Denny) to find himself at that position and needing to take the action that he did and step up and take charge like he did—and there were others on the field as well—is nothing short of amazing. The courage that took, you talk about a real leader, (Denny) is a real hero in saving Damar’s life and I admire his strength,” Bills head coach Sean McDermott told reporters Thursday.

Hamlin remains in critical condition in the hospital’s surgical and trauma intensive care unit, but on Thursday, the Bills provided an encouraging update on Hamlin’s condition, sharing that Hamlin has “shown remarkable improvement” as he recovers from his on-field cardiac arrest.

The team said Hamlin is responsive and “neurologically intact,” and that his lungs continue to heal while he makes steady progress. Hamlin is able to move both his hands and feet, and can communicate with his doctors, nurses and with his family members by writing on a clipboard. Hamlin remains intubated to assist with his breathing.

During a press conference with reporters, both Dr. William Knight IV and Dr. Timothy Pritts of the UC Medical Center credited the immediate use of CPR for Hamlin’s positive progress, adding that his outlook could have been much worse if CPR hadn’t been administered as soon as it was.

“It’s not only that the lights are on. We know that he’s home. It appears all the cylinders are firing within his brain,” Dr. Pritts said.

In his previous role as ESPN’s executive vice president for programming production, John Wildhack ’80, Syracuse University’s Director of Athletics, oversaw all ESPN and ABC game, event and studio production work, including “Monday Night Football.” He says Hamlin is fortunate to have been surrounded by talented professionals who knew how to handle this difficult situation.

“Sports at any level, especially intercollegiate athletics and professional sports, requires the involvement of many people, and this incident is an example of why it’s important to have the right people with the right training in the these roles,” Wildhack says. “As someone who spent a long time as a leader at ESPN, which broadcast the game and covered Damar’s injury, I can say this was one of the most challenging situations we’ve ever seen. I’m just grateful and thankful that the right people were on the field to help save this young man’s life.”

As Hamlin woke up on Thursday, his doctors said the defensive back was responsive and followed their commands before asking them a question by writing on a clipboard. 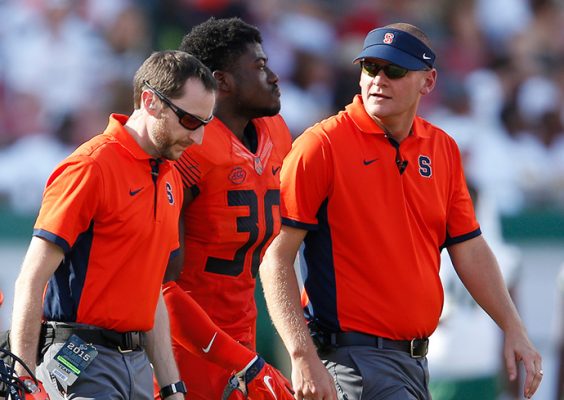 Denny Kellington (far right) is credited with playing a vital role in saving the life of Buffalo Bills safety Damar Hamlin after Hamlin suffered cardiac arrest during a game on Monday, Jan. 3.

Kellington has worked with the Bills’ athletic training staff since 2017. Prior to joining the Bills, Kellington was a member of the Syracuse sports medicine staff beginning in 2005. He spent 11 years with the University, including serving as the head athletic trainer for the Orange football team from 2011-17. His wife, Jennifer, earned a master’s degree in higher education from the School of Education in 2006.