During a 2018 visit to Oaxaca, Mexico, Fabiola Lara and Sabith Khan soaked up the rich cultural traditions of artisans who sell handmade goods like baskets, rugs, coverlets and clothing. 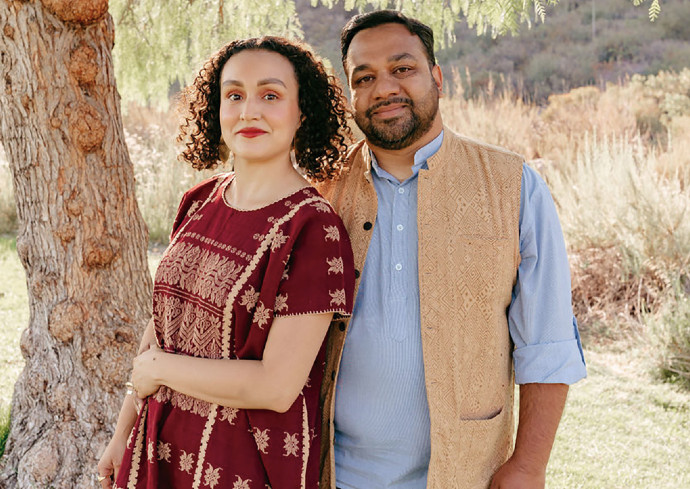 Fabiola Lara ’13 and her husband, Sabith Khan G’11, have launched a business that sells artisan goods from Mexico. Its name, Tlali Pani, translates to earth in Nahuatl and water in Hindi and Urdu.

But the married Maxwell alumni pair were troubled by the artisans’ lack of access to platforms to sell their goods and by customers’ apparent lack of knowledge about the items they were buying.

Last year, Khan and Lara launched a business, Tlali Pani, that offers handmade goods from the community they visited. They work directly with women-led artisan families who set their own prices based on the pieces they design together. Khan and Lara are committed to sustainable processes and materials, and they work to educate their customers about the traditions connected to their wares.

“We both had a life-transformative educational experience,” says Khan, who attended Maxwell after finishing undergraduate studies in his home country, India.

Lara says, “For me, it was being exposed to global issues and perspectives around cultural exchange, empathy, and deep understanding of systemic inequalities that keep people from having equitable access to resources that can be transformative for future generations.”

The pair likely crossed paths in the halls of Maxwell while both were students, but they didn’t meet until the summer of 2011, just after Khan graduated. He had relocated to Washington, D.C., for work but returned to New York to attend and help facilitate a peace-building retreat co-organized by the Maxwell School. Lara also decided to attend. She was in her junior year; in addition to international relations, she was majoring in French and francophone studies in the College of Arts and Sciences.

Khan and Lara have now been married seven years and have laid roots in southern California, near Lara’s hometown.

In addition to the business venture, Khan is a professor of public policy at California Lutheran University. He recently published a book that harnesses research conducted in Oaxaca during a 2019 visit.

Lara continued graduate studies after Maxwell, earning a master’s degree in international education development at the University of Pennsylvania in 2014.

“Sabith and I both come from families that value the art of the handcrafting process as well as the knowledge and craft traditions of artisans,” says Lara. “It’s exciting that we’ve started our work in Mexico, Oaxaca specifically, and can offer these premium goods to the public while promoting the economic empowerment of the communities that we partner with.”