While the majority of climate change research focuses on reducing and capturing carbon dioxide, less attention has been paid to methane emissions, despite the gas having 30 times the warming effect. Over a quarter of the United States’ total methane emissions are derived from enteric fermentation (cow burps) alone. Emerging research finds that feeding certain species of algae (seaweed, kelp or microalgae) to cattle can reduce their methane emissions by 80 to 99%. Unfortunately, most farmers and bovine nutritionists are unfamiliar with algae-based feed supplements, and the supplements are not always available and can be expensive.

A faculty member and graduate student in the Falk College of Sport and Human Dynamics are among a multidisciplinary team of over 50 researchers tackling this issue. Falk Family Endowed Professor of Food Studies Rick Welsh and graduate research assistant Michelle Tynan are part of the $10 million Coast-Cow-Consumer project, funded by the U.S. Department of Agriculture’s  National Institute of Food and Agriculture’s (NIFA) Sustainable Agriculture Systems Program. 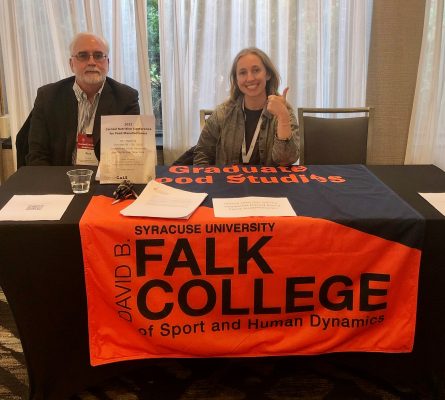 Welsh and grad student Tynan conducted surveys of nutritionists at a conference at Cornell University.

Welsh and Tynan have been surveying and interviewing conventional (non-organic) and organic dairy farmers, as well as dairy nutritionists, about their knowledge of algae-based feed supplements, the level of interest farmers and nutritionists have in feeding the supplements, and the barriers faced in implementation.

“Without dairy farmer and professional dairy nutritionists’ understanding and comfort with the technology, any potential benefits cannot be realized. Therefore, listening to and learning from farmers and other dairy professionals is key,” Welsh says.

Over the summer, Welsh and Marie-Claire Bryant ’22, who received an M.S. in food studies, held focus group sessions with organic and conventional farmers. They found that organic dairy farmers were more familiar with using algae-based feed supplements than conventional farmers, since many organic farmers already use it as a health care aid instead of conventional products, such as antibiotics. In focus group sessions, organic farmers explained their experience that feeding algae has improved cow fertility, reduced pink eye infections and lowered the incidence of mastitis of the udders.

Those sessions also revealed that conventional farmers were skeptical of the health claims, but could be interested as more science emerges and if using algae-based feed supplements is cost-effective.

Their reports also made it clear that farmers would adopt algae supplements to promote cow health—but not to reduce methane—unless a methane-reduction program was incentivized by the government, dairy cooperatives or milk manufacturing firms.

More recently, Welsh, Tynan and food studies graduate student Ryan Fitzgerald conducted a survey of dairy nutritionists at the Cornell Nutrition Conference. They found that most nutritionists do not recommend algae to their clients, not because they don’t believe it is effective, but because they don’t feel they know enough about it. The nutritionists wanted to see more peer-reviewed research showing the efficacy and safety of algae-based feed supplements.

Welsh and Tynan plan to continue surveying dairy farmers and nutritionists and will be working with other project members to understand the value of those supplements for improving farm income and herd health, as well as protecting the environment. 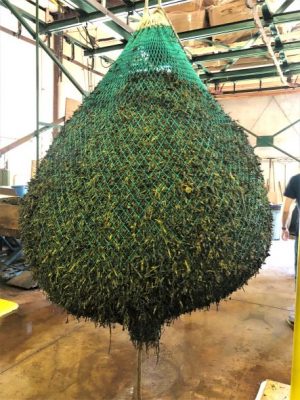 Popularizing algae-based feed supplements could also help another type of farmer—the lobster fishers of Maine, according to Welsh. Given algae’s ability to grow well in cooler Maine waters and its harvest period opposite the lobster season, it could provide an alternate source of income for that region. Algae (seaweed) is known for being able to sequester large amounts of carbon from the atmosphere, Welsh says.

“The opportunities for collaboration are as deep and wide as the ocean itself,” says researcher and graduate student Tynan. “We are hoping this research contributes to a sea change in methane reduction, sustainability and cow health.”