Hamid Ekbia, professor of informatics, cognitive science, data science and international studies at Indiana University in Bloomington, Indiana, has been appointed as University Professor at Syracuse University and will serve as the next director of its Autonomous Systems Policy Institute (ASPI). 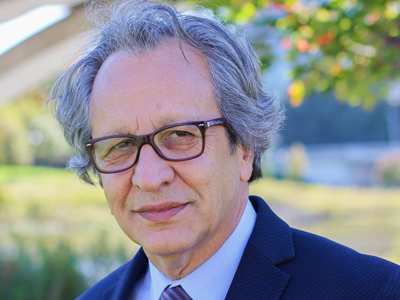 Ekbia, who is also director of Indiana University’s Center for Research on Mediated Interaction (CROMI), succeeds Jamie Winders, associate provost for faculty affairs and professor of geography in the Maxwell School. Winders served as the founding director of the institute.

Ekbia’s director appointment begins on July 1, 2023, and was approved by the Executive Committee of the Board of Trustees.

Gretchen Ritter, vice chancellor, provost and chief academic officer, says Ekbia brings a wealth of experience and deep expertise to the University, which elevated him above what was a very talented and competitive candidate pool.

“Hamid’s depth and breadth of knowledge, tremendous research achievements and successful track record as a director and leader uniquely qualify him for this role,” says Ritter. “As Syracuse University reimagines and redefines its academic strategic initiative, having someone of Hamid’s stature leading this interdisciplinary institute will allow us to further advance and promote our distinctive excellence in autonomous systems. I have no doubt Hamid will be an immediate asset to the University’s academic and research enterprise.”

Duncan Brown, vice president for research and the Charles Brightman Endowed Professor of Physics in the College of Arts and Sciences, says Ekbia is a senior scholar and collaborative visionary whose work is at the intersection of autonomous technologies and public policy.

“Autonomous systems powered by artificial intelligence have the potential to impact all aspects of human society,” says Brown. “Hamid’s collaborative approach will allow him to work with faculty members in policy, social justice, the humanities and STEM at Syracuse to help shape the emerging field of autonomous systems.”

Ekbia says he is looking forward to joining the University’s academic community and has been impressed by its interdisciplinary spirit.

“I’m thrilled with the opportunity to be part of this community as ASPI is poised to become a national and global leader in technology policy,” says Ekbia. “Professor Winders, Maxwell School Dean David Van Slyke and others have done impressive work launching ASPI and setting a solid foundation for the next steps in implementing the vision Syracuse leadership has defined. I will rely on those visions and experiences, as well as the knowledge and perspectives of my colleagues across the campus—Maxwell, Engineering and Computer Science, the iSchool, Arts and Sciences, Architecture, Newhouse, Visual and Performing Arts and beyond—in taking on this role.”

As a University Professor, reporting directly to the provost, Ekbia will work closely with scholars across campus, particularly in the Maxwell School and the College of Engineering and Computer Science (ECS). He will join the faculty on Jan. 3.

“Professor Ekbia brings a diverse set of perspectives and research leadership experiences that will facilitate the dynamic growth of ASPI and demonstrate Syracuse University’s commitment to scholarly and applied excellence with policy implications,” says Van Slyke. “I am very excited to work with him and increase the visibility, impact and influence of ASPI.”

Cole Smith, dean of ECS, adds that Ekbia is the rare polymath researcher who can contribute meaningfully across computing, information and policy.

“Because of his impressive breadth of knowledge, Dr. Ekbia envisions the way that drones impact policy, how humans interact with technology, the resilience of digital networks that connect us socially and professionally, and—critically—the implications of these interactions on the future of work and the ethics of technology,” Smith says.

Ekbia previously served as assistant professor of computer science at the University of Redlands. He earned a Ph.D. in computer science and cognitive science from Indiana University, a master’s degree in electrical engineering from the University of California, Los Angeles, and a bachelor’s degree in electrical engineering from Abadan Institute of Technology in Abadan, Iran.

Launched in 2019, the ASPI is a Universitywide interdisciplinary effort and includes 20 core faculty, from across disciplines, and engages more than 130 faculty. The institute seeks to advance knowledge and teaching in the field of autonomous systems by exploring new frontiers in the design, policy, law, governance and ethical frameworks of these fast-expanding technologies. Interdisciplinary by design, the ASPI focuses on all autonomous systems, from driverless cars to unmanned aerial vehicles to maritime systems. This broad and integrative approach allows it to offer a synthesizing, critical perspective on how autonomous systems impact the world around us and what kinds of policies, norms and practices can best shape their ethical and fair use.