Students in the Maxwell School received a Distinguished Delegates award while representing the Russian Federation at the Model UN Conference.

The delegation represented the Russian Federation during the annual high-profile simulation of international diplomacy. They were honored with a Distinguished Delegates award based on votes cast by organization volunteers who consider, for example, how accurately teams represent their assigned county’s diplomatic style.

“Considering the war in Ukraine, it was not an easy task to represent Russia at the conference, but the Syracuse delegation rose to the occasion,” says Osamah Khalil, associate professor of history and chair of the International Relations Undergraduate Program. “They diligently prepared by studying Russia’s history and politics. These awards are a testament to their skills and determination. Serving on the Model UN team provided them with an opportunity to understand Moscow’s perspective on a range of global issues.”

Held in early November, the conference drew roughly 750 college and university students from around the world. They discussed issues at the forefront of international relations and participated in debates designed to mimic how the UN navigates international issues such as security, the environment and development.

In addition to the delegation leaders and position paper honorees, members included: 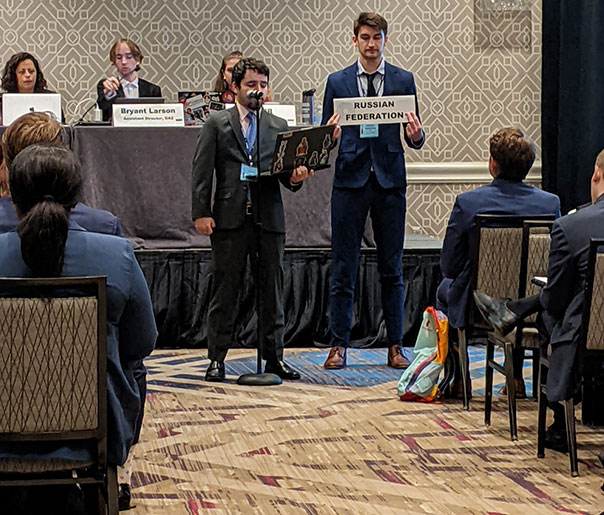 Delegation advisor Vivian Ike, assistant teaching professor for the International Relations Undergraduate Program, was unable to attend the conference. Tom Bouril, a graduate student pursing a Ph.D. in history, accompanied the team as her proxy.

“Model United Nations does a great job of helping students learn about different positions of countries involved, learning how the United Nations operates and practicing collaborative and debate skills. One of the greatest opportunities Model United Nations offers the students is the appreciation they gain for the research they have done, which really shows the value of Syracuse’s education,” says Bouril.

Story by Jewell Bohlinger, Ph.D. candidate, Department of Geography and the Environment