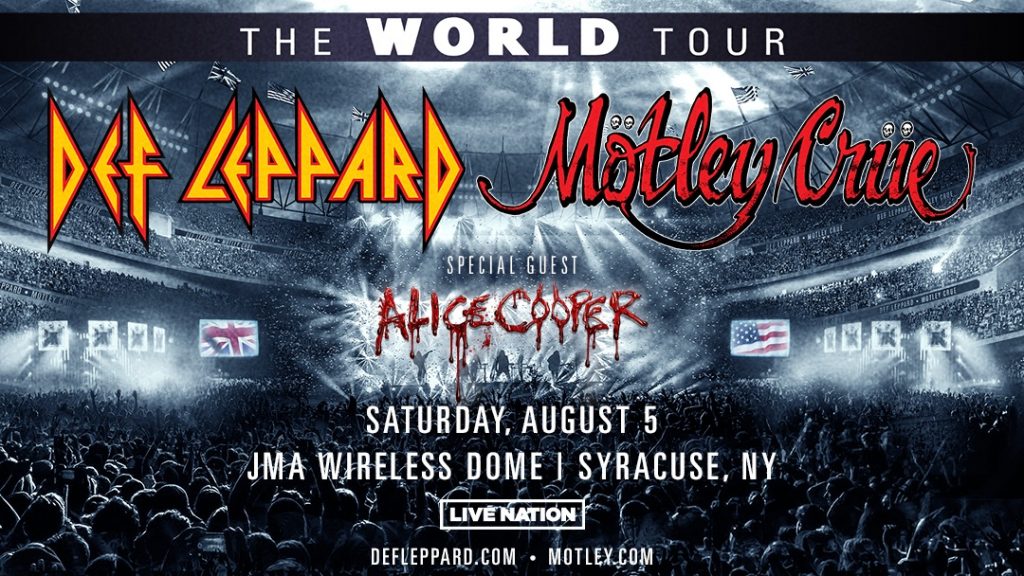 Hot off the heels of their 2022 stadium tour with more than 1.3 million tickets sold, iconic and celebrated rock legends Def Leppard and Mötley Crüe will co-headline “The World Tour” in 2023 with special guest Alice Cooper. The U.S. leg of the tour kicks off in Syracuse with a performance at the JMA Wireless Dome on Saturday, Aug. 5, 2023. Tickets go on sale Friday, Dec. 16, at 10 a.m. ET. To purchase tickets, visit motley.com and defleppard.com.

“After finally getting back on the road this past summer, we’re beyond thrilled to bring this massive tour to a global audience, including some special dates in America!” said Joe Elliott of Def Leppard.

“We had an incredible time playing The Stadium Tour in North America this summer and we truly can’t wait to take the show around the globe with ‘The World Tour’ in 2023. Crüeheads get ready because we have a few amazing U.S. dates set for you!” Mötley Crüe said in a joint statement. 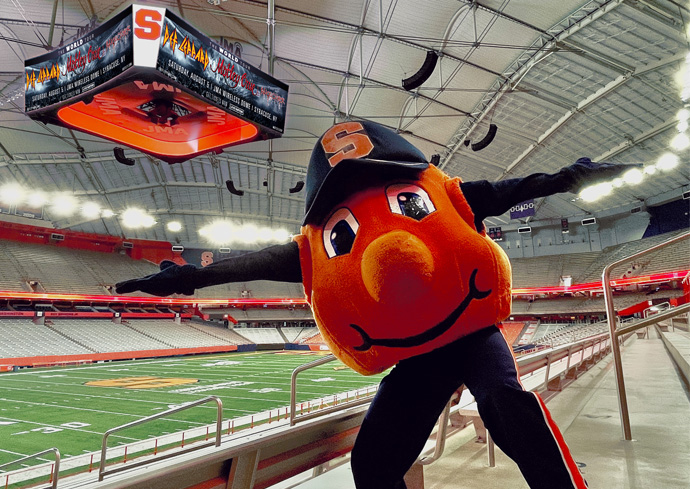 Over the course of their career, the band has produced a series of classic groundbreaking albums that set the bar for generations of music fans and artists alike. The group’s spectacular live shows and arsenal of hits have become synonymous with their name, leading Def Leppard to be heralded as the world’s greatest live rock band. Def Leppard’s influential career includes numerous hit singles and groundbreaking multiplatinum albums—including two of the best-selling albums of all time, “Pyromania” and “Hysteria,” capturing the group’s legendary tracks, bringing together such classic Leppard hits as “Rock of Ages,” “Pour Some Sugar on Me” and “Foolin.’”

For the first time, in January 2018 Def Leppard debuted their full recording catalogue worldwide via streaming and download platforms. As they did with the original release of their records, Def Leppard dominated the worldwide charts again, which found their albums charting in the iTunes Top 10 in more than 30 countries, including “Hysteria” at No. 3 in the U.S. and No. 5 in the U.K. (36 years after the album had charted at No. 1 in the Billboard charts).

Known for their iconic live performances, Mötley Crüe has sold out countless tours across the globe in front of millions of fans with such groundbreaking production highlights as Tommy Lee’s drum-rollercoaster and Nikki Sixx’s flame-throwing-bass. They pioneered the Las Vegas rock residency with a sold out run in 2012. Such hit songs as “Kickstart My Heart” and “Home Sweet Home” are frequently licensed by major brands, including NASCAR, Dodge, Coldwell Banker, Carl’s Jr. and KIA, and their music can be heard on such hit TV shows as “Stranger Things” and “Cobra Kai.”

The band’s biography “The Dirt: Confessions of the World’s Most Notorious Rock Band” became a New York Times-bestseller in 2001 and has sold over a million copies worldwide. Members of the band have authored four additional New York Times-bestselling books since. In 2019 Netflix premiered “The Dirt” biopic based on the book, which became a global hit movie scoring a 94% positive audience score on Rotten Tomatoes. As a result, Mötley Crüe gained an entire new generation of young fans who discovered the band through the movie and further solidified their iconic status, relevance and the timelessness of their songwriting.

His 2021 album “Detroit Stories,” inspired by his hometown’s legacy of rock, debuted on Billboard’s Top Album Sales Chart at No. 1, and his recent “Live From the Astroturf” video/audio release recently did the same on the U.K.’s Official Music Video Chart.

While preparing two new albums for 2023 release, Cooper continues to do his nightly “Nights With Alice Cooper” syndicated radio show, and still manages to tour up to six months each year on the road. He continues to bring his own brand of rock psycho-drama to fans both old and new, enjoying it as much as the audience does. Known as the architect of shock-rock, Cooper (in both the original Alice Cooper band and as a solo artist) has rattled the cages and undermined the authority of generations of guardians of the status quo, continuing to surprise fans and exude danger at every turn.