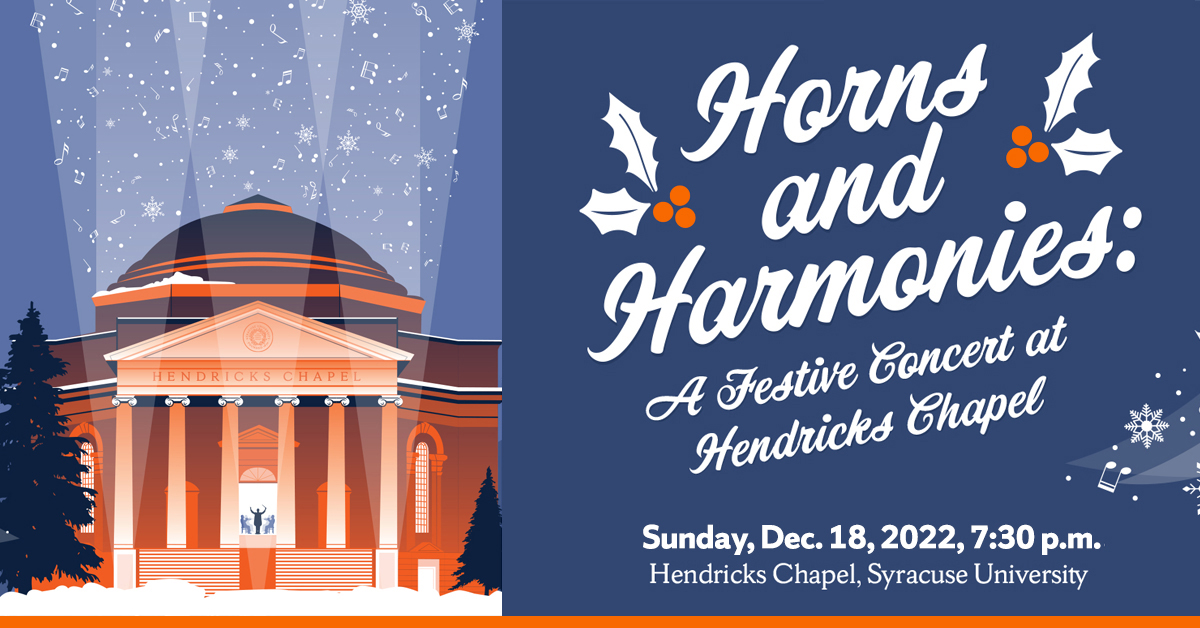 Syracuse University is ringing in the holidays with its third “Horns and Harmonies” concert on Sunday, Dec. 18, at 7:30 p.m. in historic Hendricks Chapel.

Both groups are joined by emcee Bruce Paulsen, an on-air host for WCNY-FM; Harmonic Collective, an award-winning men’s a cappella chorus; and pianist Jon Bergman.

Attendees are invited to bring food or personal care items as a donation for the Hendricks Chapel Food Pantry. For more information, contact Hendricks Chapel at chapel@syr.edu or 315.443.2901.

The University offers free parking in the Irving Avenue Garage and the Quad Lot on North Campus. Convenient on-street parking is also available, due to students being on winter break. 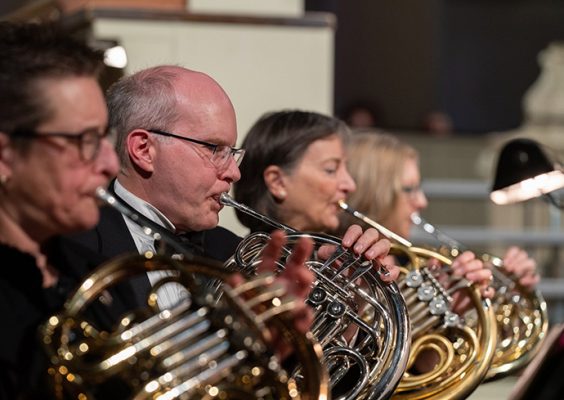 “This new holiday tradition provides a distinctive opportunity to connect campus and community,” says the Rev. Brian E. Konkol, dean of Hendricks Chapel. “The Syracuse University Brass Ensemble and Spirit of Syracuse Chorus are much loved at Hendricks Chapel, leaving us excited for this latest chapter in our collaboration.”

SUBE and the SOS Chorus came together in 2019 for the inaugural “Horns and Harmonies” concert. The results were so positive that organizers decided to formalize the collaboration.

“A tradition was born, building on decades of successful SUBE winter concerts in Hendricks Chapel,” says Spencer, a meredith professor of chemistry who has conducted, written for and played in SUBE for much of its 35-year history. “SUBE and the SOS Chorus bring out the best in each another, while fostering a sense of community.”

“Horns and Harmonies” features individual and combined sets by SUBE and the SOS Chorus, culminating in a group performance of Leroy Anderson’s “A Christmas Festival.” The evening concludes with a traditional candlelight service in which everyone sings “Silent Night.”

Spencer, for one, is excited to deliver “fresh interpretations” of seasonal classics like Prokofiev’s “Sleighride” and Strauss Jr.’s “Radetsky March,” along with such holiday fare as “Jingle Bells” and “Go Tell It on the Mountain.” There’s even a piece inspired by the John Adams orchestral fanfare, “Short Ride in a Fast Machine.”

The SOS Chorus will also delve into different genres, ranging from pop (Fleetwood Mac’s “Songbird”) to quasi-classical (“Night of Silence/Silent Night”) to Broadway (“We Need a Little Christmas from Mame”). Rounding out the lineup are such chestnuts as “Sleighride”; “Mary, Did You Know?”; and “The Man with the Bag.”

“We’re excited to reunite with the SUBE,” says Crawford, who is joined by assistant director Sky Harris and associate directors Alicia Caron and Paulette Young. “Four-part a cappella harmonies combined with the sounds of a British-style brass band are pure joy.” 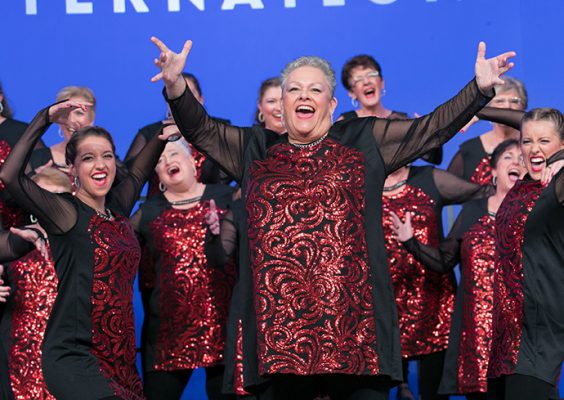 The Spirit of Syracuse (SOS) Chorus performing at the Sweet Adelines International convention.

WAER Public Media, which is licensed to the University and is part of the S.I. Newhouse School of Public Communications, also plans to air the performance in December.  Celebrating its 65th season, the 70-member SOS Chorus is one of the oldest chapters of Sweet Adelines International (SAI)—a global organization committed to advancing barbershop harmony through education, performance and competition. Prior to the pandemic, the all-female chorus placed 21st out of 600 groups worldwide at the SAI Convention and Competition in New Orleans.

“We create musical excellence in a warm, caring and supportive environment,” says Crawford, who has been involved with the chorus for more than three decades. “This encourages the personal growth and development of each member.”

SUBE is no stranger to Hendricks Chapel, having participated in the annual “Holidays at Hendricks” concert from 2007-19. The 35-piece ensemble regularly performs at Syracuse University, SUNY Upstate Medical University, the SUNY College of Environmental Science and Forestry and Le Moyne College. SUBE also presents about a dozen concerts a year throughout the region.