For more than 50 years, Syracuse University has been “the one constant” in the personal and professional lives of William “Bill” Brodsky ’65, L’68 and Joan Breier Brodsky ’67, G’68. They were together on campus as students; they forged careers grounded in their academic interests; and their commitment to public service, civic leadership and philanthropy dates back decades too. 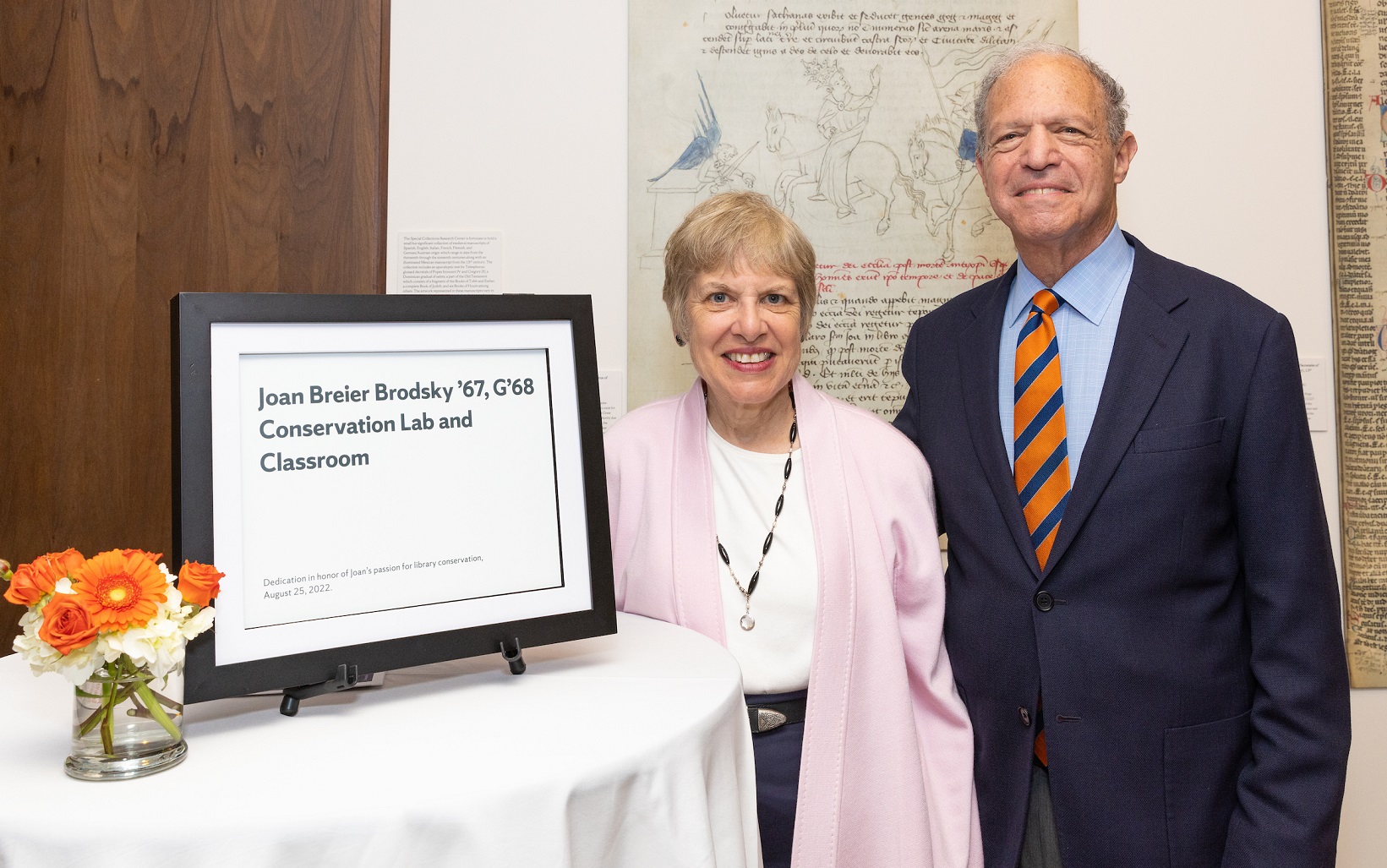 “As first-year students, we all had to take a course in citizenship taught at the Maxwell School,” says Bill. “Civic responsibility was a concept that was simply instilled in us, to Syracuse University’s great credit.”

Fast forward to 2022, when both Bill and Joan were recently appointed to serve their country in new ways by the president of the United States: Bill was chosen by President Joe Biden L’68 and confirmed by the Senate to serve as a board member of the Securities Investor Protection Corporation (SIPC), which administers a fund that is used to restore investors’ missing assets in the event of a brokerage firm failure. Joan was appointed to the National Museum of Library Services Board, which advances programs in museums, libraries and information services throughout the nation and the public’s access to historically significant resources.

In making these prestigious appointments, the president considered the expertise and commitment “brought to the table” by both Bill and Joan. “We are bringing all our worldly experiences to these new roles,” says Joan. “We both wanted to do something where we could do some good.”

They both credit Syracuse University for providing the education, the inspiration and the vast network of alumni that has sustained their lifelong commitment to the Orange community. Most prominent among the latter is President Biden, who attended the College of Law with Bill. Two of the Brodsky’s sons worked for Biden as interns on Capitol Hill; the families remain close.

It was during law school and their dating years that both Joan and Bill were drawn to public service. Bill learned about a federally funded program in downtown Syracuse to provide legal services for those who could not afford it. He became its first employee. He helped create Onondaga Neighborhood Legal Services Inc. Meanwhile, Joan, who graduated from the School of Information Studies and developed a keen interest in book preservation and library conservation work, made sure to create a record of his public service, and donated his important papers to the Equal Justice Library in Washington, D.C. Also early in their marriage, Joan had a federal grant to set up an innovative media center in an inner city school in Syracuse.

It was a Syracuse University professor who would set the trajectory for the rest of their public service. “Michael Sawyer was a revered Maxwell School professor,” says Bill. “Upon graduation from law school, I had offers to stay in poverty law or to go to Wall Street. Sawyer told me: ‘Go to Wall Street, make a lot of money and you’ll do more good for people in poverty than being a poverty lawyer.’” So that’s exactly what they did. Says Joan: “The impact of one great professor on people’s lives can be extraordinary.”

Bill began his New York City career as a securities lawyer, joining the American Stock Exchange in 1974 and became its head of options trading in 1976. Then, he and Joan had the opportunity to move to Chicago to advance his career. He rose to the highest levels of leadership at the Chicago Mercantile Exchange, the Chicago Board Options Exchange and the World Federation of Exchanges, a global body of more than 60 of the leading exchanges of the world.

“Moving to Chicago was the biggest risk we ever took,” Bill recalls. They had no family and no friends there. But the Syracuse connection came into play once more: the alumni association connected the Brodskys to alumna Renée Schine Crown ’50, H’84, whose philanthropy established and maintains the Schine Student Center. “We co-hosted a tailgate party with the Crowns. They became our role models in civic engagement and philanthropy.”

“We’ve always tried to find good people and emulate them,” says Joan. “To this day, the Crowns are the most kind, outstanding and generous people we know.”

Like the Crowns, the Brodskys remained closely connected to Syracuse across hundreds of miles. Bill served on the Law School Board of Advisors for several years, and on the Board of Trustees for decades and is now a life trustee. Joan serves on the Libraries Advisory Board and formerly served on the iSchool Advisory Board.

Together, Bill and Joan spearheaded the campaign that established the Michael O. Sawyer Chair of Constitutional Law and Politics at the Maxwell School, tapping into the generosity of alumni and colleagues who wanted to carry on Sawyer’s legacy. They are also generous supporters of the University and the Libraries, having established an endowment for the Brodsky Series for the Advancement of Library Conservation, and provided significant funding to renovate the conservation lab on the sixth floor of Bird Library, with new equipment and space to care for special collections materials and preserve rare and fragile materials. Their three sons all attended Syracuse University and their grandson Matthew is a senior in the Newhouse School.

In his Commencement speech to graduates of the College of Law in 2015, Bill advised: “Find ways to share your gifts of talent and time and ultimately maybe some money with the broader community. One of the greatest sources of satisfaction for Joan and me is our involvement in the community, in the political process, in professional and industry organizations, in educational and medical institutions and through our philanthropy. It’s amazing that as our activities have grown, how our lives have become enriched.”