Syracuse University’s football team qualified for a bowl game for the first time in four years thanks to a red-hot 6-0 start that saw the Orange climb to as high as No. 14 in the national rankings.

After closing out the regular season with a convincing road win at Boston College, the Orange (7-5, 4-4 in the ACC) found out their postseason fate Sunday afternoon. Syracuse will travel to New York City and the world-renowned Yankee Stadium for a showdown with the University of Minnesota (8-4, 5-4 Big Ten) in the Bad Boy Mowers Pinstripe Bowl.

The game kicks off at 2 p.m. on Thursday, Dec. 29, and will be broadcast nationally on ESPN.

“We’re thrilled to be invited to play in the Bad Boy Mowers Pinstripe Bowl,” head coach Dino Babers says. “I’m excited for our players to travel to New York City and experience all the fantastic events that come with a bowl trip as a reward for what they accomplished this year. I’m also happy that our fans will have another opportunity to see us play in our home state after all their support this season.” 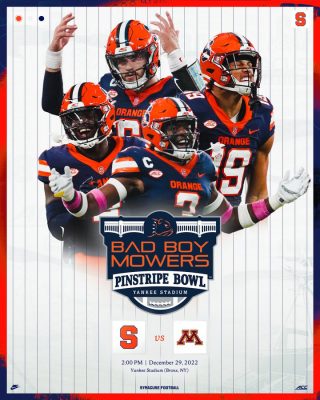 The Syracuse University football team is headed to New York City for a showdown with the University of Minnesota in this year’s Pinstripe Bowl.

Fans who are interested in making the trip to the Big Apple to cheer on the Orange are encouraged to purchase their tickets through Syracuse University Athletics to guarantee seats in the Orange’s designated fan sections. Ticket options start at $60, with discounted tickets available to all students.

Syracuse brings a perfect 2-0 record in the Pinstripe Bowl into this year’s clash, with the Orange previously defeating Kansas State by a 36-34 score in the inaugural game in 2010 and knocking off West Virginia by a 38-14 score in 2012.

Syracuse has enjoyed tremendous success playing in Yankee Stadium, sporting a 7-2 record all-time heading into the Pinstripe Bowl. This year’s squad earned the 27th bowl appearance in program history, with the Orange sporting a 16-9-1 record all-time in bowl games, including winning their last four bowl games.

The Orange and the Golden Gophers have met five times previously, with Syracuse emerging victorious in their last matchup, a 21-17 win in the 2013 Texas Bowl. The Orange are looking for their third win all-time in six matchups with the Gophers.