Red Hot Chili Peppers are bringing their 2023 tour to the JMA Wireless Dome on Friday, April 14, with very special guests The Strokes and King Princess. Tickets are available Friday, Dec. 9, at 10 a.m. 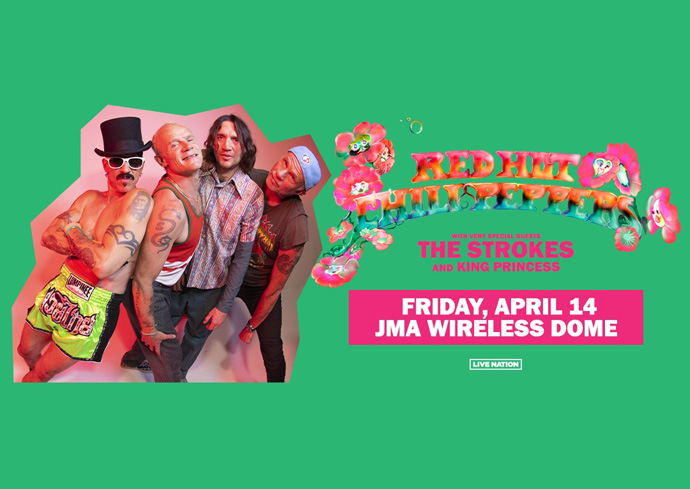 The acclaimed rock band announced their 2023 tour today, in support of their two No. 1 studio albums that were released in 2022, “Unlimited Love” and “Return of the Dream Canteen.” Following a recent Grammy nomination for Best Rock Song for “Black Summer,” the band will embark on a 23-date global trek that kicks off on Wednesday, March 29, at BC Place in Vancouver, British Columbia, with stadium shows and festival stops across North America and Europe in Las Vegas, San Diego, Houston, Lisbon, Madrid, Vienna and more before wrapping up on Saturday, July 23, in Glasgow, United Kingdom, at Hampden Park. The Strokes, Iggy Pop, The Roots, The Mars Volta, St. Vincent, City and Colour, Thundercat and King Princess will join the band on select dates.

The Red Hot Chili Peppers 2023 Tour comes close on the heels of the band’s largest 40-date stadium tour to date, which included massive sold-out shows in London, Paris, Los Angeles and more. Such notable artists as A$AP Rocky, Anderson .Paak, Beck, HAIM and more joined the band on the road through 2022. After completing the wildly successful tour across North America and Europe this year, Red Hot Chili Peppers continue into January 2023 with eight dates across New Zealand and Australia, featuring Post Malone.

As a result of the two album releases this year going No. 1, Red Hot Chili Peppers notably stand out as the first rock band in 17 years to achieve the feat. Moreover, “Return of the Dream Canteen” bowed at No. 1 on the Billboard Top Album Sales Chart—just like its predecessor “Unlimited Love” did back in April. Both albums were produced by longtime collaborator and creative confidant Rick Rubin. Plus, it reached No. 1 in numerous countries around the globe.