The largest active volcano on Earth erupted Monday. Mauna Loa is one of at least three large ‘shield volcanos’ that overlap one another on the Big Island of Hawaii. Mauna Kea and Kilauea – which erupted in 2018 – are the others. Scientists are working to learn more about this latest activity by Mount Loa. 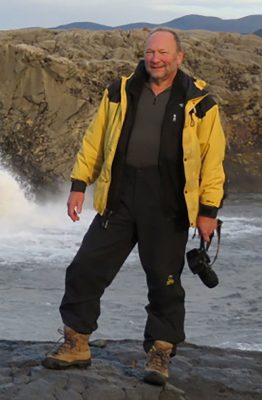 Jeffrey Karson is Professor Emeritus of Earth and Environmental Sciences at Syracuse University and extensively researches lava flow and interaction with various materials. Professor Karson is one of the directors of the Syracuse Lava Project, which allows geologists to create and experiment with 2200°F lab-created lava in a massive outdoor furnace. Karson has spoken with dozens of news outlets about volcanic eruptions and lava flow including The Washington Post, NPR’s Science Friday and Space.com.

He provides detailed information and commentary below about the Mauna Loa volcano and the latest eruption, which you are welcome to quote.

“Mauna Loa is by far the biggest volcanic mountain on Earth. It is 4,000 m above sea level but there is an additional 6,000 m below sea level, in this deep part of the Pacific Ocean, but also in part because it is so heavy that it has depressed the underlying seafloor, like placing a bowling ball on a mattress. But regardless of its size, it is not the most dangerous volcano. Eruptions that form shield volcanoes are generally small flows of basalt, the most common volcanic rock on Earth (and in the solar system). This is the same type of lava that we experiment with in the Syracuse University Lava Project. There can be some fire fountaining (lava sprayed upward on the order of 100m) but it will most likely be just lava flows as seen in the 2018 Kilauea eruption or last summer’s Iceland eruption.

“Small eruptions like these incrementally build up giant volcanic masses like the big island of Hawaii or Iceland or other ocean islands. Far more dangerous are the large explosive volcanoes of the Pacific rim (Ring of Fire) that occur above subduction zones where ocean lithosphere is shoved back down into the Earth’s interior, or continental calderas, like Yellowstone. The good news is that basaltic eruptions in places like Hawaii are frequent and not very explosive. The bad news is that larger, more explosive volcanoes erupt less frequently so that we tend to forget about how dangerous they can be.

“Mauna Loa is just one volcanic center that formed about a ‘hot spot’ of rising, hot, solid mantle material that protrudes upward the Earth’s surface. As the Pacific plate moves northwest over this hot spot and the volcanic centers it produces, a line of individual seafloor volcanoes (seamounts) to form the Hawaii-Emperor seamount chain that can be traced from the big island to the Aleutians. Each volcano erupted in turn for about 1 million years before becoming inactive and sinking below sea level and being carried along on top of the Pacific plate. Continuing movement will shift the big island to the northwest and a new volcano will emerge to its southeast. We already see a small volcano – Loihi – forming there.

“For now, the main hazards are the lava near the summit and tephra (volcanic ash) that falls like heavy, hot rain sometimes many miles downwind from the eruptive center. Hot poisonous gases, like sulfur dioxide can also pose a significant hazard. The eruption is in a remote, mostly uninhabited area, so that risk to infrastructure and lives is low. However, lava can flow rapidly (few km per hour) and long distances (10s of kilometers) along new or re-activated rift zones and reach population centers, as we saw in 2018.

“We have been experimenting with the way lava flows over different materials at Syracuse University – clay, sand, wet sand, ice, and snow – so it will be interesting to see how the lava behaves in this eruption where lava may encounter any of these materials.

The city of Buffalo has faced many hard times in these past several months, including the mass shooting at Tops, the December blizzard and previous winter storm, a deadly house fire, and now worrying about Buffalo Bills player Damar Hamiln…

With the news of the U.S. is set to approve the Patriot missile defense system, two of our Syracuse University faculty experts shared their thoughts. Army veteran Sean McFate, a senior fellow at the Atlantic Council and an adjunct professor…