Every year the nation pauses on Nov. 11 to honor those who have served in the military on Veterans Day. With Syracuse University being renowned as the Best Place for Veterans, it’s no surprise the University goes the extra mile to recognize the day each year. This year saw a flurry of activity around Veterans Day, most of which is planned and executed by the University’s Office of Veteran and Military Affairs (OVMA). The activities would not be possible, however, without the community coming together to support the day—including by illuminating many campus buildings in green light in honor of all veterans past and present. 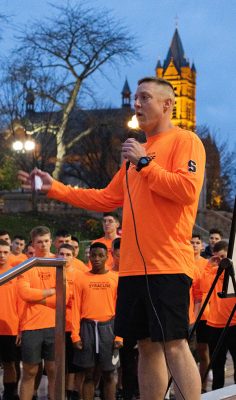 Coyne addresses participants of the 2022 Veterans Day 5K Walk/Run at the starting line.

The official observance of Veterans Day for the University community started early in the morning, long before sunrise, with the 2022 Veterans Day 5K Walk/Run coordinated by the Army Reserve Officers’ Training Corps (ROTC). Prior to the start of the run, U.S. Army Lt. Col. Matthew Coyne, professor of military science and the detachment commander for the University’s Army ROTC program, welcomed participants and gave a brief speech to remind those in attendance what the day was about.

“We’re here to honor our veterans and their families that have made the extreme sacrifices day in and day out to protect the freedoms we enjoy here in America, and protect the American way of life,” Coyne said. “It’s only fitting we are doing so at a place that has an extremely storied history of supporting our military and our veterans.”

The course began on the Einhorn Family Walk in front of Schine Student Center and ended at Hendricks Chapel after looping around the North Campus. Participants came from the University’s Army and Air Force ROTC detachments, members of its Veterans Affinity Group and supporters from the local community. Chancellor Syverud also ran with students and guests and has noted this is one of his favorite annual traditions on campus.

The community gathered later for the official Veterans Day Ceremony held in the NVRC’s K.G. Tan Auditorium. The ceremony opened with Kari MicKinkle ’11, G’20, a Marine Corps veteran who works in the Office of Veterans Success as a school certifying official, who served as the emcee for the ceremony which featured multiple guest speakers. The Rev. Brian Konkol, dean of Hendricks Chapel, gave the invocation and benediction. Musical performances were also featured by the University Singers and the 198th Army Band from Fort Drum in nearby Watertown, New York. 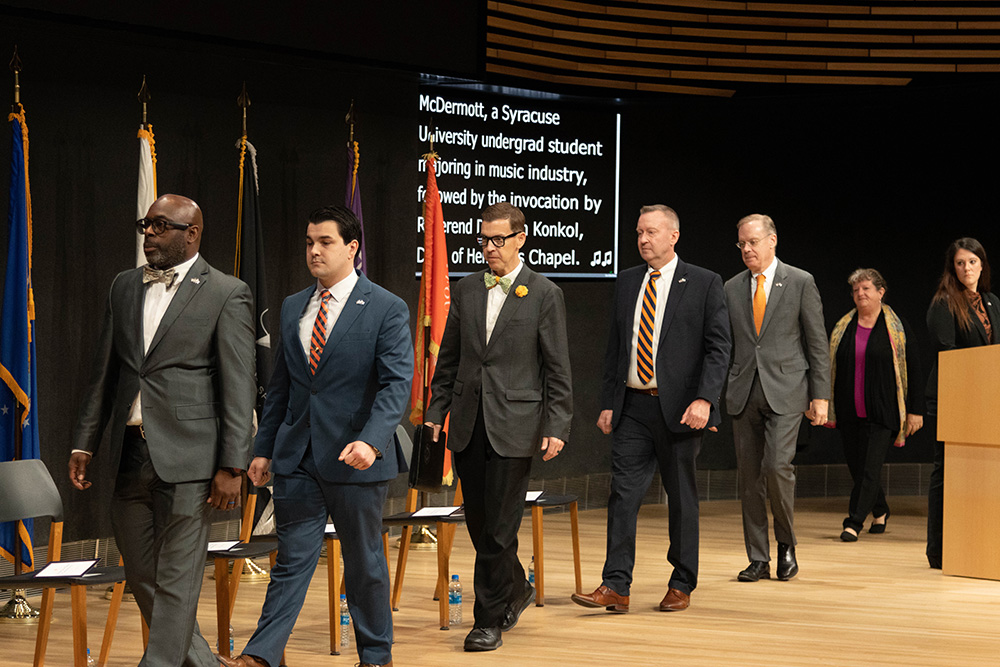 Retired U.S. Army Lt. Col. Dwayne Murray ’97, OVMA deputy director and president of the University’s Veterans Affinity Group, gave an overview of the history of Veterans Day. “Syracuse University has over 250 veteran and military-connected employees. Within this group are faculty and staff who have served in every conflict since the Korean War, as well as families of service members who are currently deployed,” said Murray. “As we celebrate Veterans Day, let us come together as a community to support and celebrate Syracuse University’s veterans and military-connected employees.”

Tony Ruscitto, a U.S. Marine Corps veteran and graduate student enrolled in the Maxwell School of Citizenship and Public Affairs, spoke about the University’s history with the military and his own experiences on campus since the University made the commitment to become the “Best Place for Veterans.”

“In the spring of 2019, after meeting with Dr. [Michael] Haynie, the OVMA and others, it became apparent that college after the Marines was within my grasp through the support and encouragement that was available for veterans at Syracuse University,” said Ruscitto, who also serves as president of the Student Veterans Organization. “While I can’t speak about other colleges or universities, what I can say is here you are presented with the tools, resources and the often necessary ‘push’ to make that transition happen and ensure it sticks.” 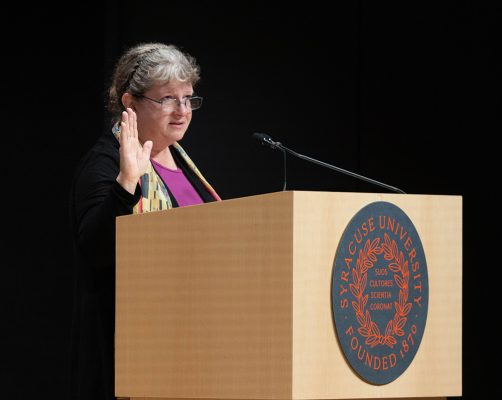 Rear Admiral Danelle Barrett (U.S. Navy, retired) speaks about delivering the oath of office during her speech at the 2022 Veterans Day Ceremony.

Barrett spoke in detail about veterans being the silent partners alongside the military within today’s military-civilian divide, addressing the impact they often have in their local communities after they leave military service.

“They’re leaders, and they continue to have a spirit of volunteerism—serving something greater than themselves in whatever they do because of that,” Barrett said. “Many apply the skills and experience they developed in the military to a life of service here at home. They take on roles in their communities as doctors and police officers, engineers, entrepreneurs, mothers, fathers. As a grateful nation, it’s our task to make that transition possible, to ensure that our transitioning veterans and those who have long since transitioned can share the opportunities that they have given so much to defend.”

A reception followed the ceremony in the NVRC’s Bisignano Grand Hall, offering the chance for veterans of all eras, military family members, and service members who are currently in the military to come together and share their experiences with one another. The idea of past generations of service members handing down their knowledge and experiences is a hallmark of today’s military community, and one of the reasons why the NVRC was built to serve as a front door for all things military-related on campus.

The following day featured the Military Appreciation Game as the men’s football team took on Florida State in the JMA Wireless Dome. While the game ended in a disappointing loss for Syracuse, it did feature special recognition for the military-connected community with military-themed uniforms and special in-game recognitions, like a Hometown Hero presentation for U.S. Navy Rear Admiral John Okon, who grew up in nearby Camillus and fondly remembers working for Syracuse University parking cars. 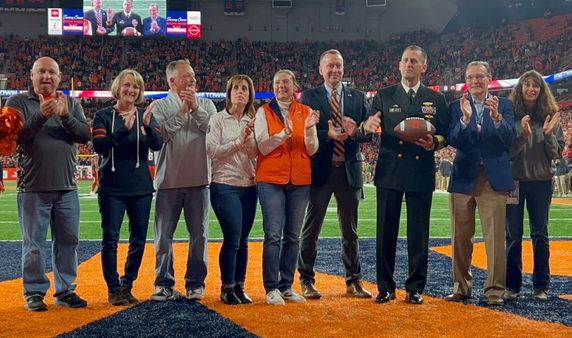 Prior to the game, the OVMA hosted its 8th annual Stars and Stripes Tailgate event, a free, invite-only pre-game party for service members, veterans and their families from the region. More than 450 people signed up for the celebration, which was hosted at the John A. Lally Athletics Complex and featured raffle prizes, an appearance from Otto and free tickets to the game along with provided transportation to and from the JMA Dome.

Throughout the festivities, the University hosted a contingent of future military leaders, some of whom may attend Syracuse University to finish their education after their time at one of four military junior colleges across the country. The cadets toured campus and attended information sessions at several of the University’s schools and colleges, giving them a brief glimpse of life in Syracuse with a visit off campus to see the local community.

Allison Short, a sophomore at Valley Forge Military College, spoke highly about the access she and the other cadets were given while visiting the campus over the weekend. “I really enjoyed going to the major schools like Falk and Newhouse, we got an overview of their biggest programs,” said Short. “I also really liked having a lot of the lieutenants who had already commissioned and been through the military colleges, like we have, and being able to sit down and talk to them to get an honest opinion about their experiences.” 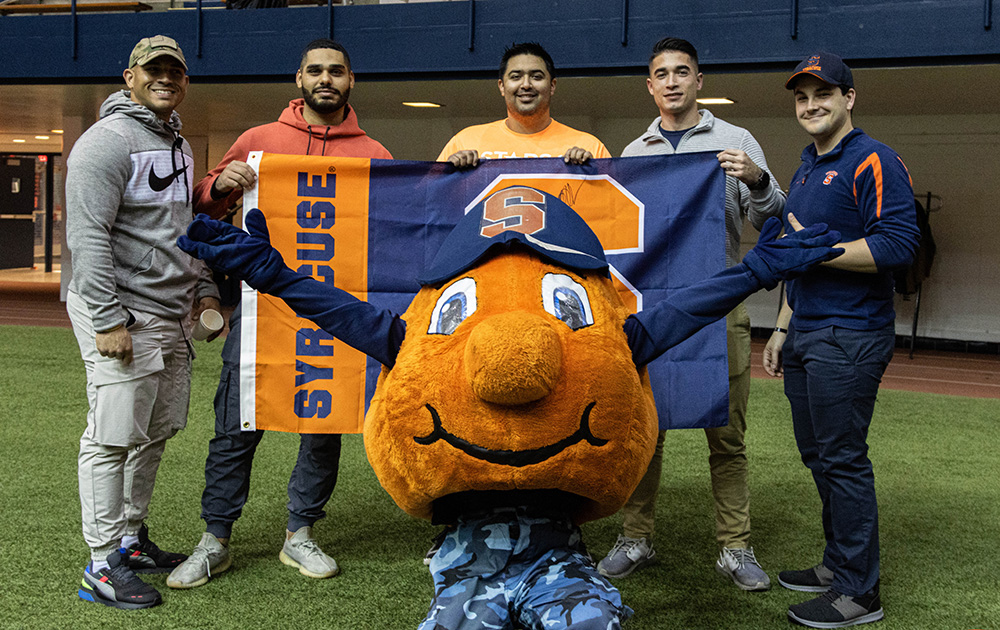 Members of the Student Veterans Organization executive board pose for a photo with Otto during the Stars and Stripes Tailgate.