In 2011, when Zuleika Rivera came to Syracuse from Puerto Rico for her undergraduate studies, she planned to pursue political science as a step toward the law career and social justice work she’d long envisioned, and she also hoped to learn more about the history of her native island.

But she had no idea that it was possible to combine all these interests—until she connected with Gladys McCormick, associate professor of history, associate dean for diversity, equity and inclusion, and Jay and Debe Moskowitz Endowed Chair in Mexico-U.S. Relations at Maxwell. 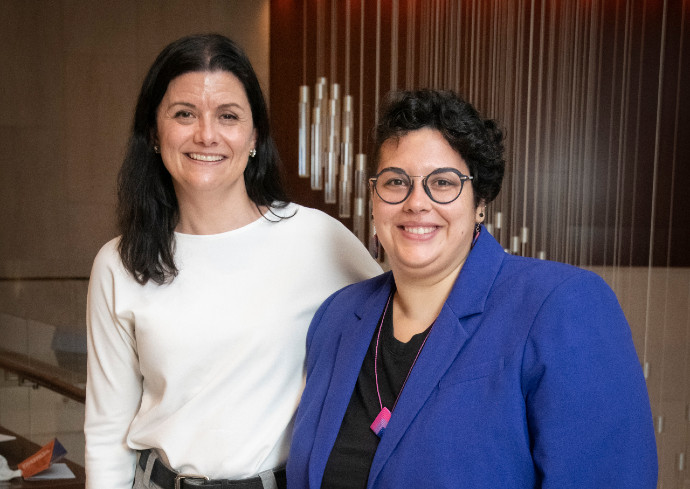 Zuleika Rivera ’15, right, with Gladys McCormick, associate professor of history and Jay and Debe Moskowitz Endowed Chair in Mexico-U.S. Relations, at the Maxwell School’s inaugural Awards of Excellence event in Washington, D.C., this past April.

“I took a class on modern Latin American history with Professor McCormick, and I was in awe,” recalls Rivera. “I just fell in love with the region, and she became a mentor. When I was trying to figure out which law school I wanted to go to, she helped me find the ones that had human rights programs, for example. It was through her that I discovered there are careers in the human rights field.”

Rivera ’15, who pursued studies in political science and policy studies, also spent a semester in the Maxwell-in-Washington program, which, she recalls, “opened up a lot of doors in terms of learning the lay of the land in D.C. and what are the organizations working on the issues that most interest you.”

Inspired by her introduction to Washington and guided by McCormick’s advice, Rivera got her law degree at American University. She also did an internship in Peru where, she says, she fell in love with a woman for the first time and came to identify as bisexual—an experience that stoked her interest in LGBTI issues.

All these facets of her professional and personal background came together in her current work as senior LGBTI program officer for the D.C.-based International Institute on Race, Equality and Human Rights, a position that involves frequent travel throughout Latin America and the Caribbean.

“We have a very particular focus on combating discrimination based on race, sexual orientation, gender identity and gender expression,” she says. “We do litigate cases, but we’re also a capacity-building organization, so we do a lot of training for small organizations on how international protection mechanisms work.”

Rivera continues to stay connected with fellow alumni in Washington, and she regularly shares her own perspective with McCormick’s current students who are aiming to work in the human rights field.

“You can know in theory what a certain career field might be, but if you don’t talk to people who are actually in that field, you really don’t know what the possibilities are or where you can get internships,” she says. “That’s very important.”

Reflecting on her career path, Rivera says she feels strongly that she’s in the ideal location for pursuing her passions.

“If you’re doing political science, human rights law and LGBTI rights as well, D.C. is the place to be,” she says. “It’s a very cosmopolitan, international city. I wouldn’t go anywhere else.”