Share
College of Arts and SciencesDepartment of Chemistryfacultyfaculty research

While corrosion resistance, durability and low cost make plastic a very efficient resource, one of its major drawbacks is the harm it poses to the environment. According to a report from Greenpeace USA, 51 million tons of plastic waste were generated by households in the United States in 2021, with only 2.4 million tons recycled, making it a pressing concern to the well-being of the planet.

To curb this issue, researchers are seeking ways to develop engineered enzymes capable of breaking down plastic–similar to the way the body breaks down food during digestion.

Each of the roughly 30 trillion cells that make up the human body contains thousands of enzymes. Each enzyme helps the cell with important functions and processes such as digestion, cell regulation and DNA replication, to name a few. Scientists would like to harness this same power to address issues outside of biology, ranging from the aforementioned breaking down of plastic to processing toxic waste to chemical weapon remediation. The idea is to create enzymes that can perform reactions that nature has not yet evolved to do.

Engineered enzymes are already at work in some common household products. For example, researchers found that by adding certain mutated enzymes to detergent, it was possible to improve their ability to break down remnants of proteins and fats on clothing in the form of food, grass or other stains. But like finding a needle in a haystack, one of the ongoing challenges for scientists is finding the right spot on a particular enzyme to improve its ability to promote a specific reaction. 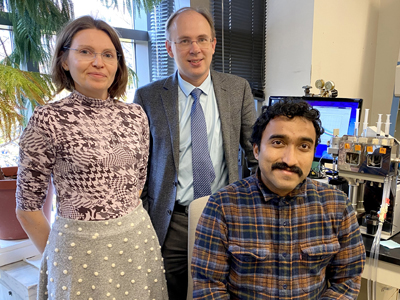 Similar to a magnetic resonance imaging (MRI) machine in doctors’ offices, which use a magnetic field and radio waves to produce images of the organs and tissues in the body, NMR uses a magnetic field to highlight areas of an enzyme where beneficial mutations could take place. In a proof-of-concept study, the team converted myoglobin, an oxygen storage protein, into the fastest artificial enzyme ever reported. Their results were recently published in the leading journal Nature.

When creating new enzymes for a particular chemical reaction, researchers look for an existing enzyme that functions in a similar way. From there, scientists introduce mutations to that protein and look for improvement of activity.

While this sounds great in theory, Korendovych, lead author, says the process of enzyme engineering is like fishing in an ocean. “You’re not going to a place in the ocean where you know you probably won’t find fish,” he says. “With our method of directed evolution, we are finding areas that we know are good places to fish. If you have a better idea of where you should be looking, you’ll have a better chance of finding these good mutations and creating new enzymes for practical and useful reactions.”

Directed evolution is a method used in protein engineering that mimics the process of natural selection to steer proteins toward a user-defined goal. To improve an enzyme that catalyzes a particular chemical reaction, the research team used NMR to analyze potential samples in a test tube. The magnetic signals that change the most indicated the areas of the protein where beneficial mutations can occur.

Korendovych notes that the beauty of this method is that it provides a fairly simple way to narrow the search space and identify places in the protein where researchers have the best odds for success.

“This is going to be a game-changer in directed evolution,” Korendovych says. “Everyone can take their own enzyme, their own inhibitor for that enzyme and do an NMR experiment and direct evolution without a lot of additional investment.”

The team says this method opens the door to endless enzyme possibilities. From creating green, re-engineered organisms to practical and useful chemistry without waste and organic solvents, this approach can help be broadly used in the field for various reactions.

“Ultimately, we think this will really unleash the power of directed evolution making possible an a la carte development of enzymes,” says Korendovych. “I think this simple approach can help not only drive the development of better catalysts but also produce new fundamental knowledge about enzymes.”