The revitalization of the American labor movement and the struggle for racial and economic justice were the central topics of a Lender Center Conversation held Monday, Oct. 24, in Dineen Hall.

After introductory remarks from current and former leadership of the Lender Center for Social Justice and a video welcome message from Marvin ’63 and Helaine ’65 Lender, who founded the center and continue to fund its work, a panel discussion commenced.

Sitting on that panel were Jaz Brisack, an organizer with Starbucks Workers United; Chris Smalls, president and founder of the Amazon Labor Union (ALU); and Johnnie Kallas, a former labor organizer and current Ph.D. candidate in Cornell University’s School of Industrial and Labor Relations (ILR) and director of the ILR Labor Action Tracker. Jenny Breen, associate professor in the College of Law, moderated the discussion. 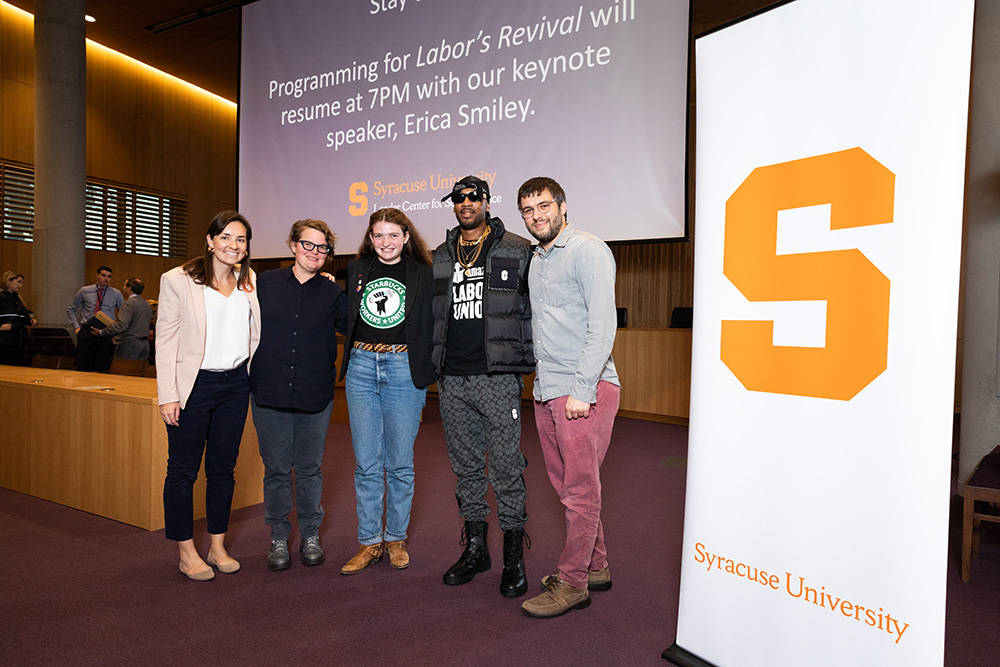 Brisack, who led the campaign that resulted in the first unionized Starbucks store in the country, told the audience of her journey as an organizer and the momentum Starbucks Workers United has built since Buffalo’s Elmwood Avenue store voted for a union in December 2021. Since then, workers at more than 240 corporate-owned Starbucks locations have voted to unionize.

“There’s no such thing as an unorganized workplace—there’s only workplaces that haven’t been organized yet,” Brisack said. She spoke about the importance of community-based action and the need to “make it socially unacceptable to be a union-buster.”

She also hypothesized that one of the factors that has benefited the success of Starbucks employees who have chosen to organize is that the company does not live up to the corporate values they espouse.

“Starbucks [employees] are 70% women and overwhelmingly LGTBQ. … There is a kind of culture at Starbucks that they create and say that they believe in, which is, ‘We’re a safe space for queer people,’ ‘We’re in support of Black Lives Matter,’ ‘We believe in the planet and the environment,’ and people came to work at Starbucks because they believed in those things,” Brisack said.

Partners (Starbucks’ term for its employees) are then disappointed to find out that the company’s actions behind closed doors don’t match the values it claims to hold. “But they are motivated to try to make it that, instead of just leaving—which I think is really conducive to organizing,” Brisack said.

Former five-year Amazon employee Smalls described the poor working conditions that led to his new job as labor union leader, saying, “What goes on behind the scenes is pretty much intolerable. It’s really inhumane. Work is work. 10 to 12 hours. For example, in Staten Island, they commute two and a half hours each way. They’re on their feet. I used to tell my new hires, ‘if you have a gym membership, you might want to cancel it.’

“Amazon warehouses are the size of nearly 14 NFL football fields, over a million square feet long. You don’t have time to go to the restroom because every restroom is about 10 minutes away. You’re tracked from the moment you clock in until the time you clock out. You have to have a rate, an hourly rate in my department alone was 400 items an hour—meaning by the end of the day you’re touching over 4,000 packages. If you don’t make that rate, you are replaced. They will fire you.”

In addition to sharing his experience as an Amazon warehouse employee, Smalls discussed his journey since he was fired in March 2020 after organizing a walkout to protest lack of proper safety protocols early in the COVID-19 pandemic.

He went on to found his first activist organization, the Congress of Essential Workers, and then the ALU in April of 2021. A year later, in April 2022, Amazon employees at its Staten Island warehouse became the first unionized Amazon employees in the country.

Smalls said the key to ALU’s victory in Staten Island was building up relationships with workers and connecting with one another on a human-to-human level. “We weren’t going to defeat Amazon by money. It’s a trillion-dollar company. So the only thing we had was love and respect for one another and care for one another,” he said. “[Our victory] showed and proved that no amount of money in the world can stop the power of people when they come together.”

The third panelist, Kallas, who worked as a labor organizer prior to undertaking his current work at Cornell, brought an academic lens to the conversation and provided an overview of the history behind the decline of the labor movement in the U.S. since the 1980s.

He also brought the data, sharing statistics from the ILR Labor Action Tracker, which aims to document the full scope of strikes, work stoppages and labor protests across the country while amplifying the voices of striking workers. Kallas said his comprehensive database of strike activity shows a more detailed view than labor data tracked by the Bureau of Labor Statistics.

He juxtaposed the current labor movement against earlier points in history, saying, “We’re not in the same situation we were in in the 1970s. It’s much harder to organize, it’s much harder to go out on strike. Workers face considerably more obstacles to engaging and organizing activities and strikes. … But we are very much in a transformative moment for the labor movement.”

The evening culminated with a book talk with keynote speaker Erica Smiley, executive director of Jobs With Justice and co-author of the recently released “The Future We Need: Organizing for a Better Democracy in the Twenty-First Century,” with Sarita Gupta. Smiley (and all three panelists) noted the flaws in current U.S. labor law; the National Labor Relations Act (NLRA), which is rife with exclusions and loopholes; and how its oversight agency, the National Labor Relations Board, is understaffed and underfunded. 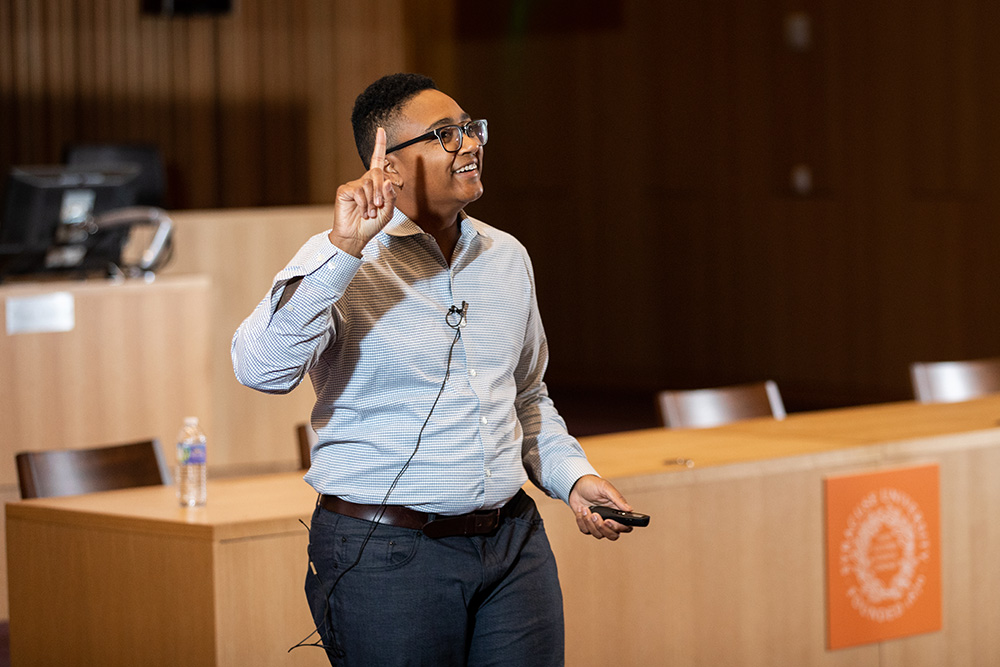 Erica Smiley, executive director of Jobs With Justice and co-author of “The Future We Need: Organizing for a Better Democracy in the Twenty-First Century” (Photo by Angela Ryan)

Early in her presentation, Smiley showed a slide with the preamble to the NLRA, positioning it as “an act to diminish the causes of labor disputes burdening or obstructing interstate and foreign commerce, to create a National Labor Relations Board, and for other purposes.”

“The goal is protecting commerce, to keep commerce moving. Labor peace. Does that sound like workers’ rights to you?” she asked the crowd.

Smiley centers the labor movement in the fight for racial justice and gender equality, which she says is a winning strategy over centering the movement on political party lines or a red-state/blue-state dichotomy. Her belief is that workers’ rights are much more firmly rooted in the Reconstruction (13th, 14th and 15th) amendments than in the NLRA.

“If we think about labor law from this context, we can understand a lot better that it’s actually something that should be foundational to democracy. And that we need to reshape it in a way that is actually about democracy—not just keeping commerce going,” Smiley said.

Gretchen Purser, associate professor of sociology in the Maxwell School of Citizenship and Public Affairs and co-director of the Lender Center, who organized this year’s Lender Center Conversation, said that nearly 300 people registered for the event, a clear indication of the surging interest in dialogue and action around labor and workers’ rights, with unions currently at their highest approval rating in over 50 years. 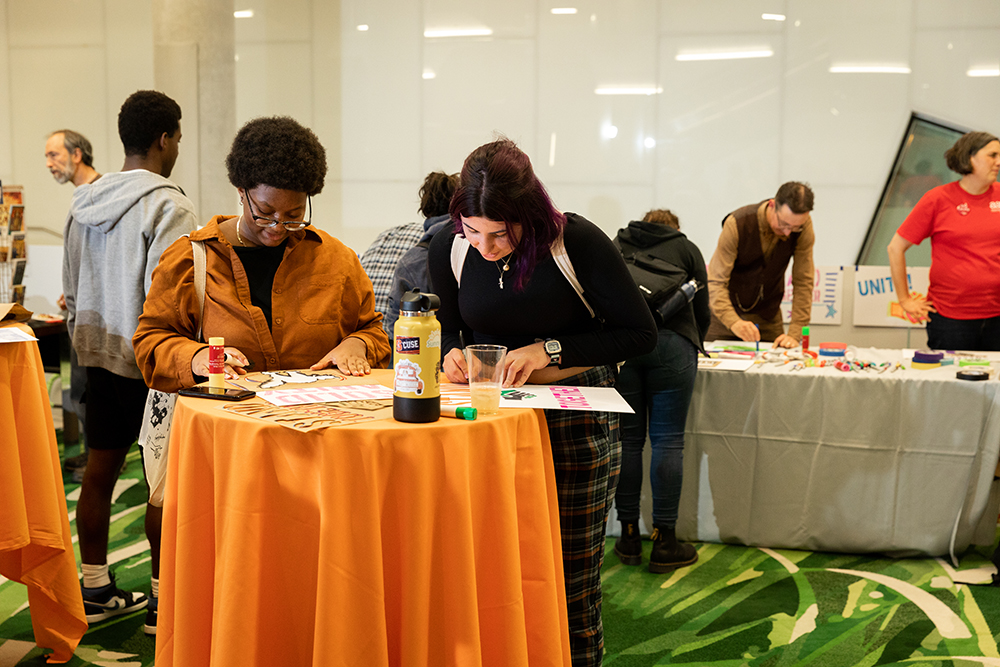 During the event’s intermission, local groups tabled in Dineen Hall and participants were encouraged to create signs in solidarity with the labor movement. (Photo by Angela Ryan)

As an academic, Purser’s research focuses on work and labor disparities, urban poverty, law and punishment, housing and homelessness and community-based action. She also chairs the board of the Workers’ Center of Central New York, grounding her in the day-to-day work to further labor rights and economic justice.

Purser kicked off the event with a labor acknowledgment, stating, “We must acknowledge that all wealth is created by labor. Our country’s economic growth and development was made possible by the forced labor of enslaved Africans and their descendants, as well as the exploited labor of immigrants. Our institutions rely upon and are organized around the unrecognized and unpaid labor of caregivers. We must acknowledge that we are indebted to the labor and sacrifice of all those who came before us and who, across time and space, in however horrific of circumstances, have organized to improve conditions for workers and secure dignity at work.”

To learn more about upcoming events at the Lender Center for Social Justice, visit its website. Members of the University community can also email lendercenter@syr.edu to join the center’s email list.