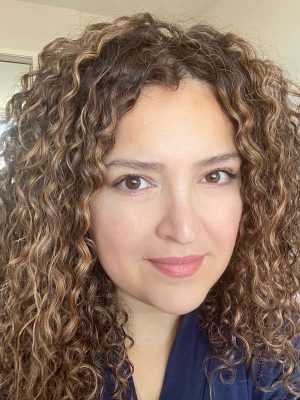 A doctoral candidate in cultural foundations of education and women’s and gender studies, Fatemeh Moghaddam’s areas of interest are decolonizing pedagogy and transnational feminist praxis, solidarity and coalition building, and ontological leadership.

In particular, Moghaddam’s current research charts indigenous feminist leaderships in Iran and the possibility of transnational coalition building. In this light, Moghaddam recently offered her expertise and opinion on the “Woman, Life, Freedom” protests that began across Iran in September 2022. In this interview, she explains the background of the uprising, her collaborative work to support the protestors and what steps can be taken by educators and others to show solidarity.

Describe the current state of affairs in Iran regarding recent protests by young women and the crackdown by the Iranian state.

On Sept. 16, 2022, Zhina (Mahsa) Amini, a 22-year-old girl was killed while in the custody of the “morality police.” After this killing and during the past few weeks, there have been ongoing protests all over the country, with protesters facing a severe crackdown by the Iranian state that has led to mass incarceration, damage to protesters’ property and the killing of hundreds by the riot police and the plain clothes militia.

These recent events have pinnacled ongoing protests. Just this year, the Iranian state repressed protests and strikes by teachers in more than 50 cities and arrested hundreds of trades union, labor and environmental activists. Although the Iranian state has severely limited internet access—and obstructs journalists’ coverage of the unfolding situations—Iranian people are recording and broadcasting the events through their phones.

Is this current moment exceptional? Does it differ from other protests and uprisings in Iran?

Despite ongoing protests in Iran, these new uprisings are distinct in many ways. Whether it can be called a “feminist revolution” or not, the way women’s body sovereignty is centered is unprecedented, as is the geographical distribution of the protests. The slogan “Woman, Life, Freedom” is borrowed from Kurdish movements in Turkey, and protests that started from the so-called periphery have since united people nationwide.

Compared to this moment, protests in the past few decades have been either less expansive across the country or have lacked a central unifying slogan. The recent violent reactions of the state to the protests have evoked immense rage and trauma that have been accumulating in marginalized bodies for hundreds of years under different regimes. It is notable that women’s bodies have been the site of patriarchal control and power in different eras—from secularist Reza Khan’s (1936) mandatory unveiling of our grandmothers to the Islamic Republic of Iran’s mandatory veiling of mothers and daughters.

Describe your petition in support of the protests, as well as the coalition that is convening to show solidarity with Iranian women.

With the support of my advisors—professors Chandra Mohanty and Dana Olwan—I wrote “A Call for Transnational Feminist Solidarity with Iranian Protest.” In the process of the petition writing, a collective was created. Now my colleagues and I are working on different fronts to raise awareness about this struggle.

The petition was signed by more than 450 scholars, as well as activists from various disciplines and all around the world. The National Women’s Studies Association (NWSA) has included this petition in their statement of solidarity with Iranian women. This support shows the extent to which brave women and girls on the streets of Iran have made their cause unavoidable with the unfortunate reality of a huge price—one that we must help them avoid paying.

There will be awareness raising sessions in conferences, such as NWSA, this year. Iranians are paying with their lives for their cause, and I hope we find ways to raise awareness and create authentic, ethical solidarity. I hope for an anti-imperial, anti-colonial, anti-racist, queer, and intersectional solidarity with the feminist revolution in Iran. Our coalition is against the Iranian regime and its expansionist colonial dogmatic politics; at the same time, we condemn US sanctions and right-wing racist, Islamophobic politics.

At the institutional level, what can educators and others do to help raise awareness? 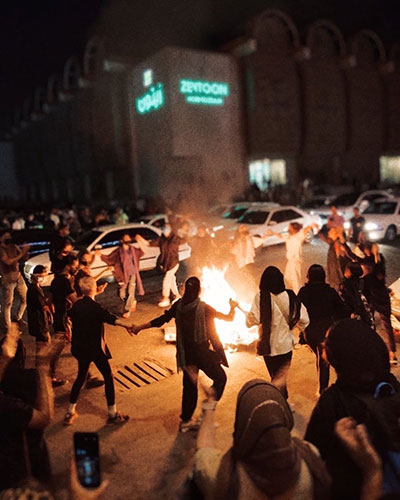 Women protestors dancing around a bonfire in Bandar Abbas

Right now, it is absolutely necessary that we all speak up and raise awareness about these events. This struggle has implications for all groups around the globe and especially ones who are committed to social justice. We are crafting syllabuses for teaching about the movement and are ready to provide collaborative guest lectures in different courses at universities.

As educators, some ways to support are:

Are there any resources that can be used in the classroom and by affinity groups and organizations?

Here are some resources for teaching and raising awareness about this struggle. Plus, educators and others are welcome to contact me at fmoghadd@syr.edu: