In the fall of 1972, Syracuse University took a bold step to shape the future of libraries on campus when the Ernest Stevenson Bird Library opened.

Up to that point, libraries were dark spaces where students conducted their research or prepared for an upcoming exam, usually studying by themselves.

That all changed with the addition of Bird Library, which featured seven floors with more than 212,000 square feet, at a cost of $13.8 million when it debuted. 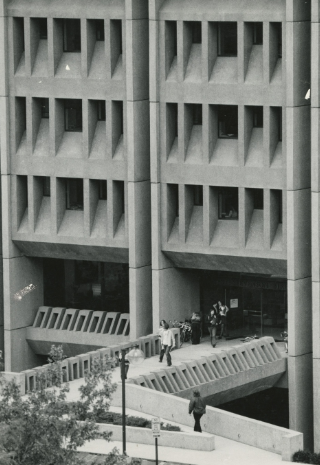 At the time it opened, Bird Library’s south entrance had an original bridge leading to the second floor.

When Bird Library opened on Sept. 5, 1972, the building was an architectural marvel. The main (north) entrance was on the Waverly Avenue side of campus, while there was a bridge that guided visitors to the library’s south entrance, on the second floor along University Place on what is now known as the Einhorn Family Walk.

Thanks to Bird Library, Syracuse University was ahead of the curve in providing students with bright, friendly gathering and study spaces. The University had improved upon the idea of what purpose a library should serve, allowing Bird Library to act as a social space as much as a headquarters for studying.

It didn’t take long for students to flock to Bird, turning it into the hub of research and study sessions on campus. Barbara Opar ’73, G’74 was studying French language, literature and culture and English as an undergraduate student when Bird Library was being built.

Originally, Opar had considered a career teaching French, but felt more drawn to other ways of engaging with students. Opar had worked as a library student assistant throughout her undergraduate career, including three years and one summer in the Slocum Fine Arts Library. Upon completion of her undergraduate degrees, Opar was hired as a School of Architecture graduate assistant to oversee the operation of the newly created Architecture Reading Room, which was first housed on the fourth floor of Slocum Hall.

Having helped move books from the branches into Bird Library, Opar had inside knowledge of how different it was from the older libraries.

“That first day that Bird Library opened was special. Bird was this brand-new building that was done in the architectural style of the time, almost like a library fortress with a drawbridge or a pedestrian bridge allowing patrons to enter on the second floor. Bird Library was the beginning of having libraries as a social space, a bright spot where students could gather and study. They created a much more attractive space,” Opar says.

Bird Library Ahead of Its Time 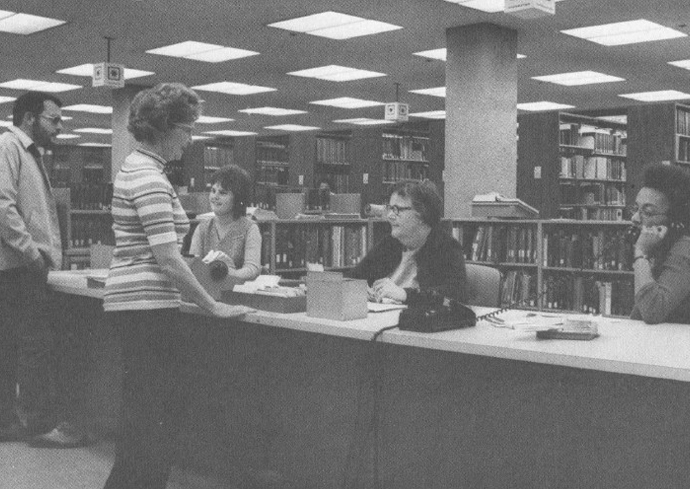 Patrons utilizing the reference desk at Bird Library when it opened in 1972.

Within the first two months of the Fall 1972 semester, library users spiked from 1,500 to 7,000, showing the need this new space was fulfilling on campus.

The transition to Bird took a village to pull off. Serving as the University’s primary library, Bird took on more than one million volumes of research items—along with millions of other items ranging from manuscripts to microform—that previously were housed in Carnegie Library, the library annex and other branch libraries.

Opar was called upon to work on the moving crew responsible for transporting the contents of the Fine Arts branch library from Slocum Hall to Bird Library, logging countless evening hours packing up books and ensuring they were properly organized in their new home. 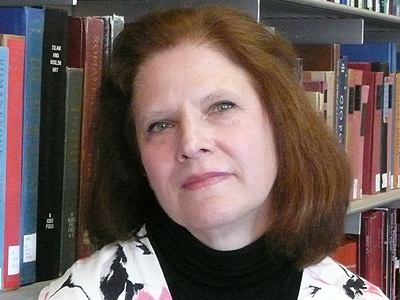 “Bird Library was everything Carnegie Library wasn’t. Back then, you didn’t go to the library to hang out. Carnegie had these big study areas throughout, but Bird gave students comfortable study spaces. That was a big difference. Bird was a more open and uplifting space, with bright colored chairs and beautiful oak furniture. People were very much pleased with Bird when it opened. It became a popular place for students to meet, study and hang out,” Opar says.

A Lifelong Commitment to Serving Students

Today, Opar has spent almost 50 years as the architectural librarian on campus. She spends roughly half of her time in Slocum Hall, just like she did as a student employee, helping students with their reference and resource questions, while assisting with library acquisitions, reserves, the working drawings collection and any other faculty support issues pertaining to the library system.

Opar, who says she was one of the youngest people Syracuse University Libraries ever hired when she was given the job almost five decades ago, never thought forward to her longevity as a librarian on campus.

“My purpose has not changed. I’m always here for the students to help answer their reference questions. I still like doing reference work, I enjoy working with our students and I enjoy the public service nature of the job. But I never would have believed I would work for the Libraries for 50 years. Syracuse University is my home and it has been my life all these years,” Opar says.

On Sept. 14, 2022, the University celebrated 50 years since Bird Library’s opening. Opar has been a member of the campus community since 1969 and served on the planning committee that organized campus-wide celebrations for the library’s anniversary.

Bird Library serves as the busiest academic building on campus, drawing more than one million visitors annually (pre-COVID-19). Besides acting as the preferred study space on campus, Bird Library is also home to Syracuse Abroad, the Center for Learning and Student Success, Blackstone LaunchPad, the Office of Undergraduate Research and Creative Engagement, the Digital Scholarship Space, Faculty Commons, the Center for Teaching and Learning Excellence, Women in Science and Engineering and the Special Collections Research Center.