There are a few vivid details Sara Shemin Cass recalls about her grandfather, William Shemin ’1924 (1896-1973), from her time growing up in Westchester County, New York, and spending summers with her family upstate in Lake Champlain. 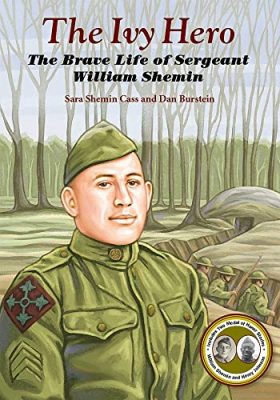 “The Ivy Hero: The Brave Life of Sergeant William Shemin” by Sara Shemin Cass and Dan Burstein will debut on Nov. 8. (Book jacket courtesy of the authors)

At a strapping and formidable 6-foot 2, William was a “man of the land.” He loved working with his hands and being with the earth. While he valued the small things like cleaning your plate or writing with impeccable penmanship, above all, William was fiercely committed to three things: his close-knit family, his beloved country, and his fellow Jewish service members.

As a young child, Sara remembers learning from her grandfather how to properly salute, raise, lower and fold the American flag. While he walked with a limp and would eventually need the assistance of a cane later in life, she remembers William seemingly always out in his fields digging and bringing back fresh fruits and vegetables.

“My grandfather was so patriotic. As the son of Jewish immigrants who fled the pogroms in Russia, he really saw the United States as a safe haven and as a land of opportunity,” Sara says. “He was thankful to have a home here, and the freedom to practice his religion. And his military service was a huge point of pride.”

He served his country in World War I as a sergeant in the 4th Infantry Division, known as the “Ivy Division,” a play on the Roman numeral IV. Demonstrating extraordinary bravery during a long-fought battle in 1918 near Bazoches, France, William repeatedly put his life on the line, leaving his cover and crossing open space multiple times to rescue the wounded. Despite exposing himself to heavy machine gun and rifle fire, he managed to save three injured comrades. As a result, he was honored with a Distinguished Service Cross, Purple Heart and numerous other awards and clasps—but at the time, was denied the Medal of Honor due to his Jewish faith.

A new book, “The Ivy Hero: The Brave Life of Sergeant William Shemin” (City Point Press, 2022), authored by Sara and her cousin, Dan Burstein, shares William’s story—from his earliest years on the Lower East Side to his military service and time at Syracuse University, to the 15-year fight of his daughter Elsie Shemin-Roth ’51 for William to be posthumously awarded the Medal of Honor. He is the only known graduate of Syracuse University to have received the distinction.

While the book, whose target audience is middle-school-age readers, tells William’s unique story, Sara says she and Burstein were motivated to write it because of the universal themes evident in his experience. “The book is about William and his family values—but it’s also about discrimination, it’s about immigration, it’s about tenacity, it’s about bravery,” she says. “We thought it carried a broader message that people outside of our immediate family would be interested in.” 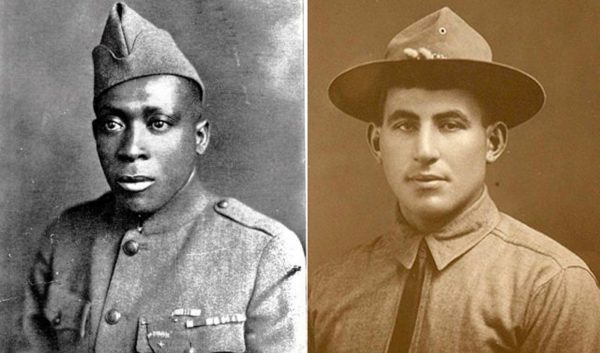 The lives of Henry Johnson (left) and William Shemin are permanently linked by both their immense bravery during World War I and the discrimination they faced after the war. (Photo courtesy of the Shemin family)

“The Ivy Hero” is peppered with family anecdotes and photos, helpful definitions and a glossary of terms, beautiful illustrations by Gary Bullock, important lessons, and thought-provoking questions for readers. There is even a curriculum available on the Ivy Hero website that schools can use.

Although the two never met, Henry and William’s lives became inextricably linked in 2015 when both men were posthumously awarded the Medal of Honor nearly 100 years after their military service. Henry had been denied the honor because he was Black, despite displaying incredible bravery fighting alongside French soldiers on behalf of the Allies in 1918-19.

“We thought it was incredibly important to include Henry’s story in the book, because discrimination is discrimination—and unfortunately it comes in all different forms,” says Sara. “As my family was working to have my grandfather recognized [with the Medal of Honor], we learned that Senator Chuck Schumer was also pursuing recognition for Henry Johnson. He didn’t have any living relatives that could be tracked down, so we decided to adopt his cause as our own. We decided that whenever we talked about William Shemin, we would also tell Henry Johnson’s story, including in this book.”

Making Sure Our Heroes’ Stories Are Told

When William and Henry were finally recognized in a joint ceremony at the White House on June 2, 2015, President Barack Obama spoke extensively about the importance of righting wrongs.

“It has taken a long time for Henry Johnson and William Shemin to receive the recognition they deserve. And there are surely others whose heroism is still unacknowledged and uncelebrated,” Obama said. “We have work to do, as a nation, to make sure that all our heroes’ stories are told. And we’ll keep at it, no matter how long it takes. America is the country we are today because of people like Henry and William—Americans who signed up to serve and rose to meet their responsibilities—and then went beyond. The least we can do is to say: We know who you are. We know what you did for us. We are forever grateful.”

VIDEO: Check out the story of World War I Medal of Honor Recipient William Shemin, as recounted by his daughter Elsie Shemin-Roth ’51.

(Video courtesy of the Medal of Honor Society) 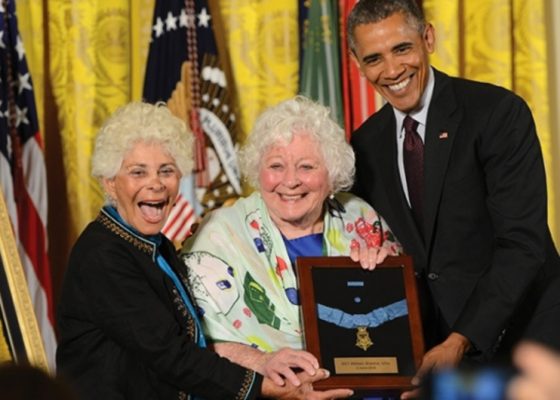 From left: Ina Shemin-Bass ’53, Elsie Shemin-Roth ’51 (William’s daughters) and President Barack Obama at the Medal of Honor Ceremony in June 2015. (Photo courtesy of the Shemin family)

Asked what she thought her grandfather’s reaction would have been if he was in the room that day with President Obama and sixty of his family members, his two daughters squeezing one another’s hands while tearfully and joyfully accepting the Medal of Honor on his behalf, Sara carefully considers.

“He never would’ve thought he was discriminated against or that the military did anything to overlook him. He was happy with the medals that he had,” she says. “But I think he would’ve been full of pride. He wasn’t a man to show a lot of emotion, but the ceremony, being at the White House, getting that recognition … I think he would’ve cracked a little, gotten a little teary-eyed. He was so proud of and thankful for this country that he was willing to sacrifice his life for it.”

Post-Military Life and Legacy at Syracuse

William returned from the war in 1919 and enrolled in the New York State College of Forestry at Syracuse University (now the State University of New York College of Environmental Science and Forestry) on a full scholarship. Reconnecting with his love of plants and his passion for the land at Syracuse, William went on to start a successful nursery and landscaping business in the Bronx, New York.

His time at Syracuse also ignited generations of Orange pride. All three of William’s children—Elsie Shemin-Roth ’51, the late Emmanuel “Manny” Shemin ’52, former University Trustee, and Ina Shemin-Bass ’53—studied at the University, as well as one of his granddaughters (Leslie Shemin-Lester ’84) and four of his great-grandchildren (Rachel Forman ’05, William Cass ’08, Samuel Cass ’13 and Scott Bass ’15).

The Shemin family has been interwoven with the University community in myriad ways for over one hundred years. A tribute to William and his service and some of his personal memorabilia are on display alongside other military-affiliated heroes in the Hall of Honor in the National Veterans Resource Center at the Daniel and Gayle D’Aniello Building.

The Shemin family’s generosity is further evidenced by their support of numerous philanthropic initiatives, including but not limited to the Shemin Family Lecture Series, the Emanuel and Rhoda Shemin Auditorium in the Shaffer Art Building, the Rhoda Shemin Student Lounge in the Winnick Hillel Center for Jewish Life, the Manny Shemin Resource Room in the Stevenson Education Center at Manley Field House, and the Shemin Micro-Grant Fund within the Institute for Veterans and Military Families. William Cass ’08, great-grandson of William Shemin, serves as a member of the Young Whitman Advisory Council and supports various initiatives at the Whitman School and the D’Aniello Institute for Veterans and Military Families.