For Renée Verdi ’22, a Career in Public Health Starts in Communications

The path to a rewarding career is rarely a straight line. Renée Verdi​ followed two paths–public health and policy studies–that led to her first job and will ultimately help Verdi reach her career goal of advocating for reform in the health care industry.

Verdi graduated in May 2022 with a dual major in public health from the Falk College of Sport and Human Dynamics and policy studies from the Maxwell School of Citizenship and Public Affairs. She was recently hired by FGS Global, “a worldwide leader in all aspects of strategic communications, including corporate reputation, crisis management, government affairs, and transformation and change,” according to the FGS website.

FGS has a variety of clients, and Verdi is an associate on FGS’ health team that works with health-related clients such as biotech companies and insurers. In her communications role, Verdi builds media lists, tracks campaign metrics, summarizes media coverage, covers briefings and helps publish the health team’s weekly newsletter.

“I’ve always wanted to do something that is value-driven, which is partly why I became so passionate about public health,” says Verdi, who works in FGS’ Washington, D.C., office. “I’m glad that in my current job I get to help with health clients, even if it is more public relations-heavy. It’s still a very hands-on job and will benefit the people they serve in the end.” 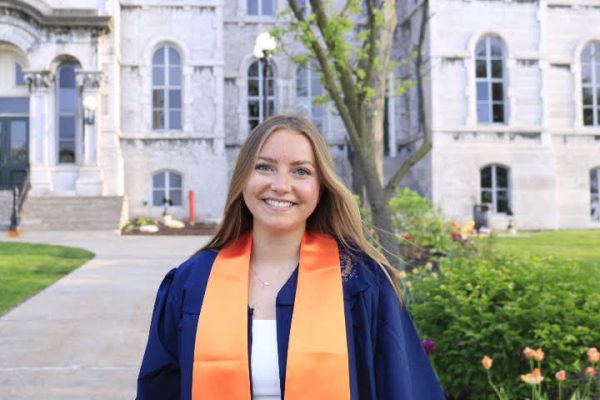 Renée Verdi ’22, a dual major in public health at the Falk College and policy studies in the Maxwell School, and was recently hired by one of the nation’s most prestigious strategic communications firms.

Benefitting people has been on Verdi’s radar since she was a high school student in Havertown, Pennsylvania, a Philadelphia suburb. She started to consider the health care industry as a career path and participated in a medical shadowing program in her senior year.

“While the program made me realize I do not want to be on the patient-facing side of health care, it introduced me to public health and I instantly knew it was what I wanted to do,” Verdi says. “Since I didn’t want to be on the public health pre-med track, my (Falk College) advisor recommended I take policy studies, which is what started my interest in the policy studies major.”

Verdi chose Syracuse University for its academic reputation, and it was the only college on her list with a public health major. And when she toured campus with other accepted students, she learned about the many volunteer opportunities for public health majors that were available through the Falk College and that confirmed her decision.

Public health is a broad major, and Verdi says the guidance she received from Falk Academic Counselor Matthew Yager helped her determine what she wanted to do with her education. Those discussions led Verdi to add the policy studies major, which helped narrow her career goals.

“The public health core classes were always interesting to me, especially the classes about health disparities and health literacy,” Verdi says. “Getting exposure to these types of classes made me even more passionate about public health because they opened my eyes to the deep-rooted flaws of our current health system, inspiring me to advocate for change in my future career.”

Bernard Appiah, an assistant professor in the Department of Public Health, was one of Verdi’s mentors at Falk and she was a member of his research team for two different projects. Verdi says she appreciates that Appiah guided her through the projects but also encouraged her to try things on her own, such as taking the first stab at drafting parts of their research paper.

“Dr. Appiah gave me great career advice, like to always have a plan B, and make a good first impression,” Verdi says. “I’m so glad I got to work with him during my time at Falk and I’m excited to work together in the future, too.”

Appiah joined the Falk faculty in the fall of 2020 and Verdi was one of his first undergraduate public health mentees. Appiah is director of Falk’s Research Program on Health Communication and Public Engagement (H-COPE), which has research collaborations in the United States and globally. Appiah says Verdi’s role as a research assistant at H-COPE played a key role in landing the job at FGS.

“In one of the projects, Renée and her colleague conducted content analysis of press statements issued by Ghana, U.K. and U.S. leaders on COVID-19. The other project involved content analyses of minority newspaper stories on COVID-19 vaccine hesitancy,” Appiah says. “Working with Renée was a pleasure because she was eager to learn new concepts, including content analysis as a research method, and was very diligent as well.”

Appiah says he’s not surprised that Verdi landed a public health job that focuses on communications. 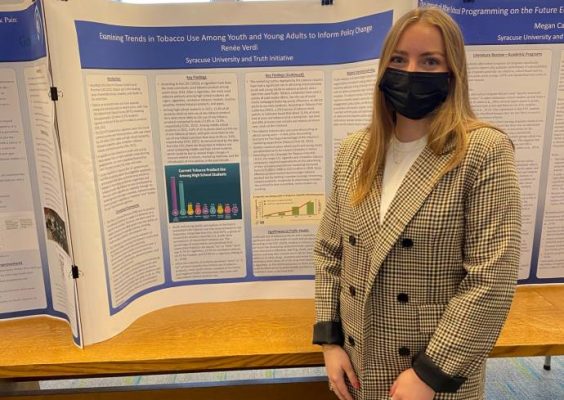 Renée Verdi’s senior capstone project was based on her internship with Truth Initiative, a leading tobacco control nonprofit. Verdi researched tobacco use among youth and young adults, including what motivates tobacco use among the population and policy solutions to curb use and protect short-term and long-term health outcomes.

“As we discussed some of the newspaper stories on COVID-19 vaccine hesitancy, Renée’s contributions mirrored those of health reporters,’’ Appiah says. “She has a bright future in public health communication and advocacy”

In addition to her research with Appiah, Verdi says her service-learning classes that are part of Falk’s public health curriculum also provided invaluable experiences because they allowed students to work toward a common goal with an organization and a group of peers.

“When I was paired with the YWCA, my group helped organize their first Stand Against Racism march, which we all attended as well,” Verdi says. “It was really cool to be a part of such an important event and it felt rewarding to know that we helped pull it together.”

At FGS, Verdi says “no two days have been the same” as her clients have a wide range of needs and goals. She’s enjoying working on the newsletter, which is shared both internally and externally and informs FGS Global colleagues and clients about health stories to watch, recommended articles to read and other resources for clients.

“That type of work is what got me interested in public health and is where I hope to go in the future,” Verdi says. “I also hope to tap more into my policy studies major down the line, as new policies are crucial to reforming the health care industry.”